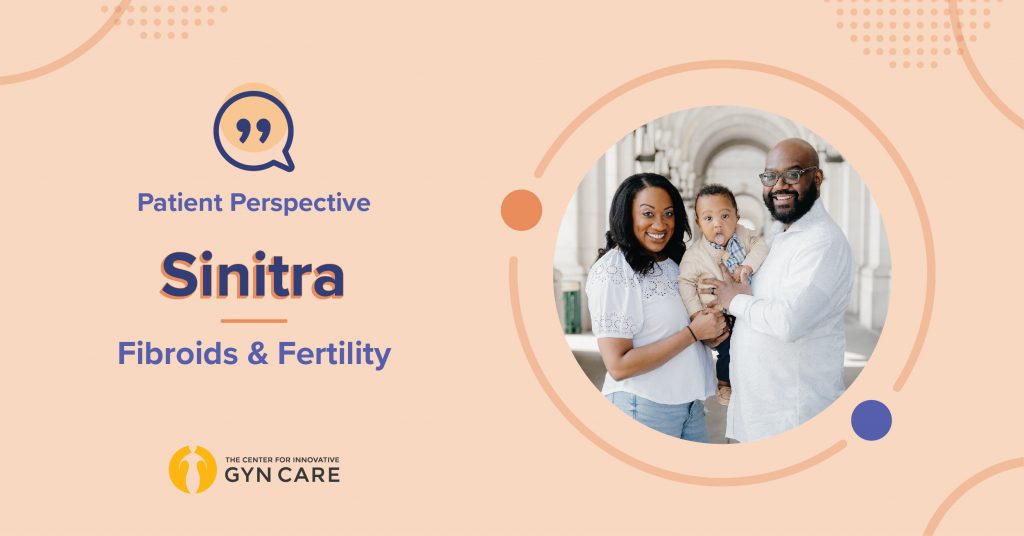 Miscarriages are common, and the answer to why they happen is often unknown. But GYN conditions like fibroids can be a contributing factor. After a devasting pregnancy loss, former CIGC patient Sinitra knew she needed to address GYN health issues to make sure her body was ready for another pregnancy. But with four fibroids, the only option given to her was an open myomectomy that would push her fertility dreams by at least a year.

CIGC’s fibroid specialists are dedicated to treating fibroids through minimally invasive surgical procedures that allow women to retain their fertility options for the future.

With CIGC, Sinitra was able to find freedom from fibroids and start the family of her dreams.

How Fibroids Can Affect Pregnancy

Sinitra didn’t know she had fibroids until her 8-week ultrasound during her first pregnancy in summer 2019. The scan showed four small fibroids, but her OBGYN assured her they wouldn’t cause any problems with her pregnancy because they were not located near the birth canal.

But at her 12-week ultrasound, they had grown significantly. One was at least 12 centimeters. The fibroids, in combination with a shortening cervix, may have been what led to pregnancy loss at 16 weeks. Sinitra and her husband were devastated.

It’s estimated that 1 in 4 pregnancies end in a miscarriage and it’s important for women to know it’s not their fault. Miscarriages (loss before 20 weeks) and pregnancy losses or stillbirths (loss after 20 weeks) can happen at all stages of a pregnancy for a wide variety of reasons, some of which remain unknown even after the loss. Fibroids may or may not have been involved in the loss of Sinitra’s first pregnancy, but removing them was important to her overall health and well-being.

“Looking back [before my first pregnancy], I had all the signs: heavy bleeding, bloating,” Sinitra said. “But the fibroids were completely missed.”

During Sinitra’s annual gynecological appointments, her OBGYN always mentioned her iron levels were low. But an ultrasound to check for any abnormalities was never suggested. The possibility of fibroids was never even mentioned. 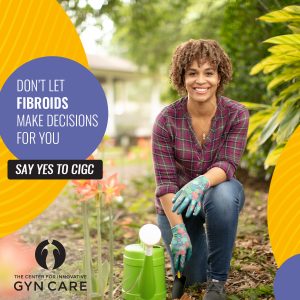 Not only can fibroids cause infertility depending on where they’re located, but they can also increase the risk of miscarriage and pregnancy loss. Because fibroids are dependent on estrogen in order to grow, heightened estrogen levels during pregnancy can cause fibroid growth to accelerate. This can cause pregnancy complications like placental abruption, fetal growth restriction and preterm delivery. To lower these risks, fibroids should be removed before trying to conceive naturally or begin in vitro fertilization (IVF).

Sinitra knew she wanted to try to conceive again, and to increase the likelihood of having a full-term pregnancy, she knew she needed to address the fibroids and find the best way to remove them.

Find freedom from fibroids to begin your fertility journey. Talk to a patient advocate about your options today.

LAAM: A Better Alternative to an Open Myomectomy

At an appointment in July 2019, Sinitra’s OBGYN offered to perform an open myomectomy, a procedure to remove fibroids from the uterus through a large incision (with an average recovery time of six to eight weeks). The earliest available surgery date was in December.

But she didn’t like the idea of open surgery, and her OBGYN told her she would have to wait about a year before trying to conceive again. Sinitra was already 38 and didn’t know how much time she had left to become pregnant.

In the space of a few weeks, she heard from three different people — who didn’t know each other — about their minimally invasive surgical experiences at The Center for Innovative GYN Care.

“I thought it had to be too good to be true,” Sinitra said. “So I scheduled a consultation to see if it was true.”

During her consultation with Dr. Natalya Danilyants, CIGC’s co-founder and GYN surgical specialist, she discovered she was a candidate for the LAAM procedure. CIGC’s Laparoscopically Assisted Abdominal Myomectomy could be performed using just two small incisions, allowing Sinitra to return home immediately after surgery and recover in about one to two weeks. And Dr. Danilyants would be able to schedule the surgery for September.

“I really liked that Dr. Danilyants was a specialist, and this was what she did,” Sinitra said. “Dr. D answered every question and never made me feel like I was asking stupid questions.”

After talking it over with her family, Sinitra decided to move forward with Dr. Danilyants and the LAAM procedure.

Just a few months later, Sinitra was fibroid-free and pregnant again. At first, she was worried because she had gotten pregnant earlier than the timeframe that was originally recommended after undergoing surgery. She still had some complications, including a shortening cervix, but with a combination of bedrest and close monitoring, everything turned out fine.

Sinitra reached out to CIGC after the birth of her son to let us know that she had her baby boy.

“I remember feeling no hope this time two years ago,” Sinitra said. “But reading testimonials and hearing about other great experiences [at CIGC] really helped me.”

Why Do Doctors Recommend Hysterectomy?

If pelvic pain, heavy or abnormal bleeding or other symptoms of an underlying GYN condition are interfering with your quality of life, a 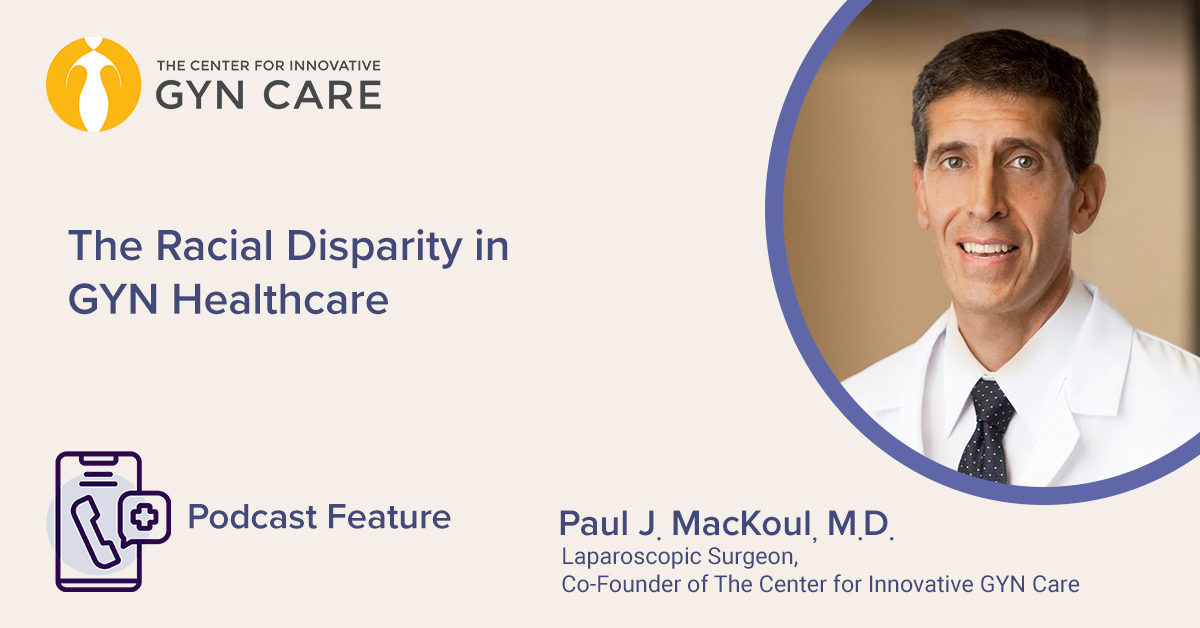 The Racial Disparity in GYN Healthcare

Dr. Paul J. MacKoul, Co-Founder of The Center for Innovative GYN Care sat down with Eric Dye of Enterprise Podcast Network (EPN) to

PRESS
TERMS OF SERVICE
SITE MAP
CAREERS
PRIVACY POLICY (U.S.)
© 2021 Copyright – The Center for Innovative GYN Care
By sending us an email, you acknowledge that you have read, understand, and agree to our Privacy Policy and Terms of Service. Please do not include confidential personal information and never include your Social Security Number, your date of birth, or any insurance/financial information in any email to CIGC. The internet is not absolutely secure, and CIGC’s email system is not encrypted.“Schedule a Consultation” feature is provided as a courtesy for individuals to initiate conversation with CIGC. Contacting CIGC through this feature is not intended to create, and does not create, a new patient relationship with CIGC or any of its health care providers.Testimonials or statements made by any person(s) within this site are not a guarantee as to outcomes. Examples of treatment outcomes in this website are not intended to convey any warranty, either express or implied, as to outcomes, promises, or benefits from treatment. Every patient is treated on a case-by-case basis. The content of this site is not a substitute for medical advice, care, or evaluation by a medical professional.