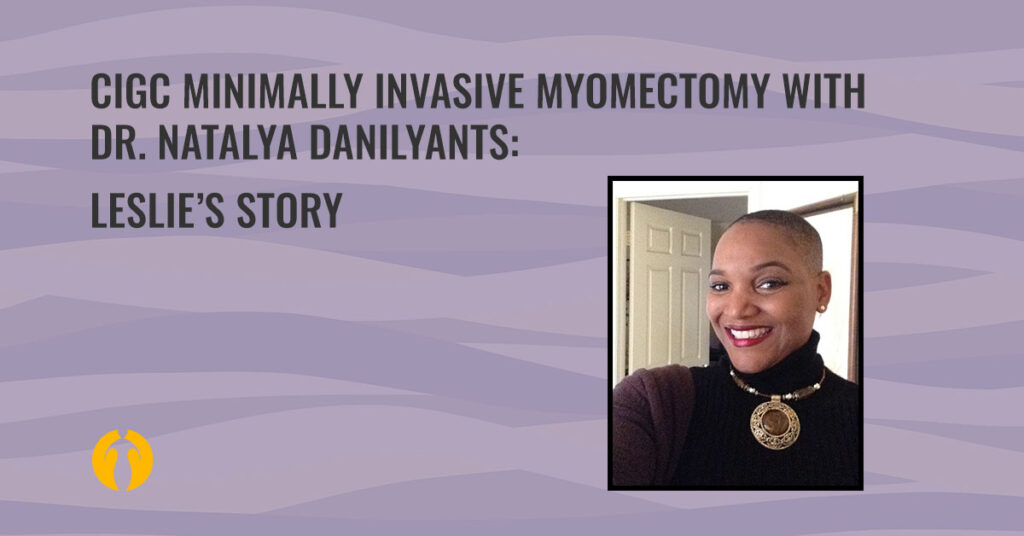 It took several months of discovery for Leslie W. (Buford, GA) to find out that she had fibroids, and then several more to find the right minimally invasive myomectomy doctor with whom she felt would listen to her.

“I discovered that I had fibroids the year before last. I had some bleeding when I urinated and in-between periods. I have a history of kidney stones, so I thought it might be that. I saw a urologist first, and spoke to another urologist for a second opinion. I was heading into procedure for that, but when I rolled into the following year, I noticed I had some bleeding in between my cycle. That’s when I immediately saw another doctor, a gynecologist and she suggested a sonogram and an endometrial biopsy.”

After discovering the fibroids, it was a year before finding the right specialist.

“I was anemic. The first doctor I went to did some tests, and I had to start taking iron pills. I had a heavy flow, and it was embarrassing. Worrying about it coming through my clothing. It was very difficult to plan accordingly. It could be a pain, especially going on a trip, or traveling in the car, it could come through on your clothing.”

“It slowed me down, because it was a constant back and forth to the doctor. For that first year, it took a little bit of time to figure out what it was. I had the diagnosis with the sonogram, and then I had to go in for an MRI to determine how many fibroids there were and then I had to decide how I wanted to handle the problem. I didn’t want to have a hysterectomy yet. Even though I’m in my 40s, I wanted to be able to savor those last couple of years, and I didn’t want to close that door just yet.”

Selecting the right treatment for fibroids can be overwhelming. Many women with large fibroids who want to maintain fertility are often told that hysterectomy is their only option. It is often the case that the limitation is with the surgeon performing the procedure.

THE CIGC DIFFERENCE: THE SURGEONS

“Initially, I was going to go through a regular gynecologist, I was prepped to have the surgery, but I was told the surgery would be 3 hours, the incisions would be large, and I would have a 6-8 week recovery. I wasn’t too pleased with that. They also told me that if I bled too much, they would have to do an emergency hysterectomy. I wasn’t too receptive to that. I didn’t want a hysterectomy, I didn’t want to be in surgery that long because it opens you up to risks, and I would be tilted. It sounded very risky to me, so decided to look through other options.”

Leslie had four fibroids removed. The LAAM technique for myomectomy is performed as an outpatient procedure, so women return home the same day. The incisions are small, so recovery is typically two weeks or less.

The LAAM minimally invasive fibroid removal technique developed by the minimally invasive GYN surgeons at CIGC uses 2 small incisions, one 5 MM incision at the belly button, and another 1.5 inch incision at the bikini line. Using advanced minimally invasive surgical techniques, LAAM allows the surgeons to thoroughly remove all fibroids, no matter the size, location or number, and the uterus is repaired by hand. LAAM is an important development, as it allows the surgeons to feel all of the fibroids. This cannot be accomplished by a robot or with standard laparoscopy. CIGC patients return to themselves in about 2 weeks.

“I was surprised at the speediness of the recovery. I was pleased with that, and so far so good, I haven’t had any challenges or problems. I didn’t have any pain like a major surgery, but I was cognizant about what the doctor had asked me to do. After my surgery, I gave myself an additional week to clear mind, body, and soul.”

“The incisions are fine. I didn’t have any problems with the healing. There was some tenderness for a while after the surgery, but you can barely see where the lower incision is, there is essentially no scar. The upper scar isn’t noticeable at all.”