Why One Woman Traveled for the Care She Deserved: Cindy’s Story 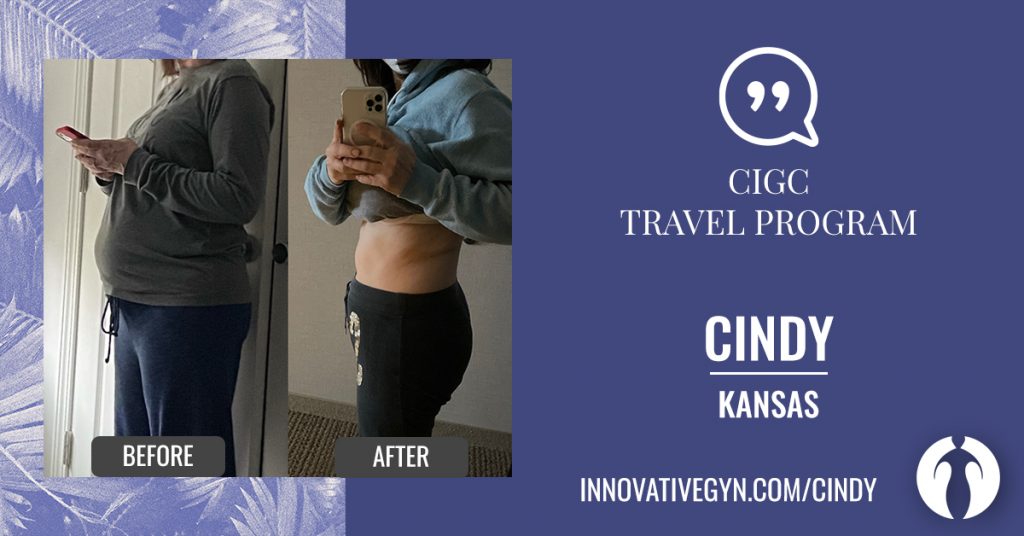 Former CIGC patient Cindy had fibroids. But multiple doctors in her home state of Kansas told her she had no options other than an open hysterectomy that would leave her with a vertical scar all the way from her sternum to her pubic bone. For Cindy, a busy CFO and mother of three girls, that wasn’t an option. She knew she had to find a better way. She found it at The Center for Innovative GYN Care.

A Family History of Fibroids

Cindy’s family has a vast history of fibroids and other gynecological conditions. Her mother had experienced such heavy bleeding that she almost died, and one of her sisters had several fibroids removed during a c-section. Her other sister had severe endometriosis at 19 and had surgery to remove it at 21. “We grow fibroids faster than we grow hair,” Cindy said. “We don’t go through menopause in my family.” Still, she had hoped that focusing on good health and nutrition would leave her unaffected. For most of her young adult life, Cindy didn’t experience any issues. But in her early 40s, she started feeling pain in her abdomen. A scan to find out if her appendix was to blame found fibroids instead. Even with a fibroids diagnosis, Cindy’s doctor suggested the pain was a result of irritable bowel syndrome (IBS) and recommended a gluten-free diet. As someone who is always in pursuit of improving her health, Cindy tried various types of diets, but nothing seemed to work long term. At one point, her doctor suggested seeing a therapist, dismissing her symptoms as emotional rather than physical. Over time, she kept getting sicker. Her doctor diagnosed her with Lyme disease and sent her to a specialist, who disagreed with her doctor. She didn’t have Lyme disease. She reduced the amount of water she was drinking because she was needing to go to the bathroom more and more often. She would often wake in the middle of the night choking because the contents of her stomach would come back up when she was lying down. All along, the fibroids were growing, compressing her stomach and beginning to tear through her colon. She was starting to look pregnant. She grew frustrated that her doctor wasn’t linking her symptoms to the fibroids and joined a Facebook group to seek answers from other women who might be going through similar situations. After reading through the group’s posts and doing her own research, Cindy knew the fibroids were the root of all her problems.

Live more than two hours away from a CIGC location? Learn about our travel program!

Cindy knew she didn’t want open surgery, which typically includes a large incision, a hospital stay and about eight weeks of recovery time. But three different OBGYNs told her that, because her fibroids were so large and located in the lining of her uterus, open surgery was her only option. She had heard about laparoscopic procedures for fibroids but couldn’t find a surgeon in Kansas who would do it for her case. But another woman in Cindy’s fibroids Facebook group had posted about undergoing laparoscopic surgery for large fibroids. The surgeon who had performed her surgery was CIGC’s co-founder and surgical specialist Dr. Paul MacKoul. Cindy reached out and scheduled a telemedicine consultation. She immediately clicked with Dr. MacKoul and they bonded over their mutual enjoyment of the Peloton. She appreciated his clinical manner and clear confidence and knew the type of surgery she was seeking would be performed with a high level of skill. Just seven weeks later, she flew to New Jersey to have a partial hysterectomy. Previous doctors had told her the experience of having surgery would be difficult, so she was nervous. But she had undivided care and attention from the surgical center staff, who were successful in calming her nerves. As soon as she woke up after surgery, she checked under her gown to see the evidence. Her stomach was completely flat, and she only saw three tiny incisions. She was in disbelief. “It was such a small moment in time,” Cindy said. “[My surgery] was significant in the way it changed my life, but an insignificant event.” She returned to her hotel the same day and began walking laps in her room. By the end of the day, she had walked over a mile! Within about a week, she was able to take a Peloton class. Because the recovery was so easy for her, sometimes Cindy has to remind herself she did, in fact, have surgery.

The care you deserve may only be a plane ride away. Talk to a patient advocate about our travel program today.

Minimally Invasive Should Be the Norm

In Cindy’s opinion, this type of surgical procedure should be the norm. After 10 years of health issues, she no longer has any pain or discomfort. Her three daughters have even mentioned that she looks younger. “I got my life back,” Cindy said. Cindy is passionate about sharing her story to let other women know there’s an alternative to open surgery. Often, the burden falls on individual women to dig for the information they need. “I want to let everyone know that this was a life-changing event for me,” Cindy said. “Women need to demand the care they deserve.” As for Cindy, she’s able to make goals and plans again. Next up: she’s giving herself a two-year deadline to enter a body sculpting contest.