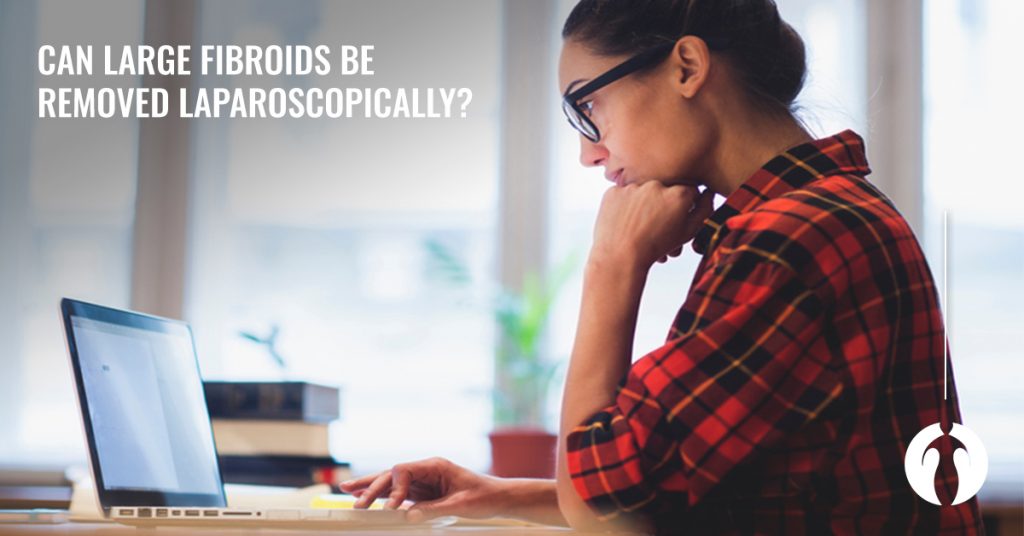 Fibroids are noncancerous tumors in the uterine muscle. Though they may start small, they will grow over time. For many people with fibroids, the longer they wait to remove them, the fewer treatment options they have.

When patients with large fibroids seek surgical removal, doctors will often tell them minimally invasive or laparoscopic procedures are not possible due to the size of the fibroids. But research shows open surgery is not the only way to remove large fibroids.

Most surgeons opt for an open procedure because they can see the entire uterus and it’s easier to access fibroids, especially ones that are deeply embedded in the uterus. But when a skilled surgeon performs the LAAM or DualPortGYN techniques, the difference in size and number of fibroids removed is similar to the results of open procedures2 — without the need for a large incision and long recovery time.

Using these techniques, the surgeon can feel the fibroids through a 1.5-inch incision, ensuring every fibroid — even ones as large as a grapefruit or melon — is removed. Complete fibroid removal makes recurrence of fibroids less likely and, for those desiring fertility, a successful pregnancy more likely.

The only true cure for fibroids with no chance of them growing back is a hysterectomy. But women of childbearing age may opt for the LAAM procedure to remove fibroids while preserving their uterus.

A 2019 study from CIGC’s research team shows the LAAM technique is effective for removing large fibroid tumors while minimizing blood loss and lowering complication rates. Methods such as conventional laparoscopic myomectomy and robotic-assisted myomectomy are limited in the size and number of fibroids that can be removed, while open abdominal myomectomies are associated with total complication rates up to three times higher.

Using the LAAM approach, surgeons are able to take out the same average fibroid weight and same number of fibroids as they can using the open abdominal approach — without the associated higher complication rate and much longer recovery period.

The Cure for Large Fibroids

The definitive treatment for fibroids of any size is a hysterectomy. Removing the uterus prevents any fibroids present in the uterine muscle from growing back. Fibroids can add weight and size to the uterus, making it more difficult for surgeons to remove in a conventional laparoscopic hysterectomy.

The DualPortGYN technique allows a skilled surgeon to completely remove the uterus — along with fibroids of any size that are embedded in the uterine wall — through two small incisions. Through this minimally invasive technique, CIGC expert surgeons have removed uteri that weighed as much as 20 pounds because they were laden with large, heavy fibroids3.

A 2018 study1 that looked at uterine weight to find out if a heavier uterus was a risk factor for complications after hysterectomy surgery found the risk to be higher for open abdominal hysterectomies. Its authors concluded that patients — even those with a heavy uterus due to fibroids — who need a hysterectomy would benefit from a referral to an experienced surgeon who is qualified to perform the procedure laparoscopically.

While a major surgery like an open hysterectomy may take six to eight weeks to recover from, the DualPortGYN technique has patients back to their regular routines in an average of one to two weeks.

Based on the data showing the efficacy of removing large fibroids through CIGC’s innovative techniques, it is not only possible to remove large fibroids laparoscopically — it’s the new gold standard.

Interested in learning more about treatment for large fibroids? Contact our patient care team to find out if you’re a candidate for CIGC’s laparoscopic surgery techniques.

Speak to Our Patient Care Team