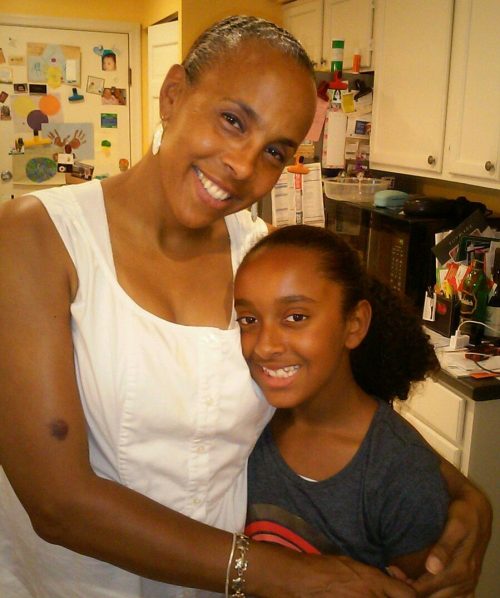 “I knew I was going to need to do this surgery,” said Tracy J. “At first, I was hysterical, then reluctant, and finally I was ready to do it and I was laid off and didn’t have insurance.”

Tracy had fibroids which had caused heavy bleeding. She needed to have her blood checked regularly.

“The pharmacist who did my INR (blood test) and I bonded right away, and she started telling me about Dr. Paul MacKoul, MD. After that conversation, I kept his information with me for 4 years.”

Tracy had not been sick in her life.

“In 2012 I was helping some friends move some furniture in an estate move. I was feeling really badly, and because I don’t ever feel physically bad, I did everything you shouldn’t do. I flew across country and it got worse. I came back and met with a doctor. She was very stern and sober, and she said I needed to go to the emergency room. It could be a blood clot, and you need to go now. It turned out, I had a small embolism in my leg, and I was extremely anemic, my blood iron was so low. The hematologist in the hospital was the one who suggested the fibroid could be what was resting on the vein, and hindering circulation.”

KIDNEY DAMAGE AND OTHER LESSER KNOWN RISKS OF FIBROIDS

“The day I had to call my family and tell them that I was in the hospital with a blood clot, the hospital staff kept telling them that I could have died, which didn’t help their fears. I had an 8-week course of iron infusions. I had a baseline of 5. It’s supposed to be 12. They asked me to do 65 mg in the morning and 65 at night, and after doing it consistently, I got my level up to 11. I realized after that I had adapted to the amount of iron in my system.”

LEARN THE DANGERS OF ANEMIA DUE TO FIBROIDS

The follow-up with a gynecologist indicated that where the fibroid is sitting, it could be blocking the blood flow. That doctor decided to monitor the fibroid and put Tracy on blood thinners. A couple of years later while traveling in Atlanta her leg started swelling again.

“At this point, I was having this horrendous bleeding, even though the clotting was managed, the bleeding was out of control and my stomach was always swollen. I now had a new job and great insurance, so I called The Center for Innovative GYN Care.”

“From the moment I called them and got to the office, the entire staff was so nice. Once Dr. MacKoul came in and sat down with me, all of my anxiety was gone. We laughed so hard. I told him that I had heard about him 4 and a half years ago. I kept all of the information about him so I wouldn’t lose it. I said ‘If I can’t talk to you about this directly, I can’t talk to anybody.’ I had such a great fear about the surgery, and I feel like the only person I wanted to have do this was Dr. MacKoul.”

PREPARING FOR SURGERY AT CIGC

“Even the paperwork was simple. My paperwork at work is more complicated than what I had to do for the surgery. When I actually went in for surgery, the anesthesiologist was one of the most calm people I’d ever met. Everyone was so welcoming and kind, and you really can feel the love.

RECOVERY WITH A MINIMALLY INVASIVE DUALPORTGYN HYSTERECTOMY IS FAST

Tracy had a rapid recovery.

“I spotted one day and had a little soreness where the incisions were. When I finally removed the tape, everything was healed. I had company the day after my surgery, I was walking within the first week. By a week and a half, I was walking an hour a day. I never even filled the pain prescription.

“By the time I came in for my post op, I felt relieved. Dr. MacKoul said that my uterus, which would normally be about 70 grams, was 862 grams. ‘You needed to do this. This would have developed into something really troublesome if you had waited any longer.’ This was looming over my head for so long. I feel wonderful now.”

“I had a very large fibroid, signs of endometriosis. Dr. MacKoul showed me the picture of what came out of me, and I was so relieved to finally have it done. Everything comes together: I knew he was the one who had to do my surgery from the very beginning. He even gave me a choice on the procedure. When it came down to discussing hormone therapy, I felt he respected my decision. It was important to me that he feels the way that he does, because it matters in the end result.

“The best thing I could do for my circulation is to get up and move because I really didn’t feel bad, I was just a little sore. A friend had a total hysterectomy and she didn’t want anyone to touch her. She also had a laparoscopic procedure, she just had an entirely different experience.”

While many CIGC patients take up to a week to recover from a minimally invasive DualPortGYN hysterectomy, some are up and moving the next day, and are back to a normal routine before the week is over. DualPortGYN is an advanced technique that minimizes blood loss and uses just two tiny incisions, each only 5 mm. One incision is placed at the belly button and the other at the bikini line. Once the incisions heal, they are virtually undetectable. The procedure is also safer than other laparoscopic, robotic or open procedures. The surgeons use retroperitoneal dissection to map the pelvis, so that all of the delicate areas are protected. Women recover from a DualPortGYN hysterectomy in about 10 days, and many return to work in a week.

“One of my friends’ sister has terrible endometriosis, so I pulled out my CIGC cards and told her to go to Dr. MacKoul. After the surgery, I am a one-woman marketing team, a grassroots campaign manager. I took a stack of business cards and I give them to people who I know have GYN problems.”

A long time ago, I was an actress, I did some modeling, and movies, and there is a celebration of one of the films and I’m going to look amazing. I’m happy to be here. I don’t believe in wasting a day. I’ve lost friends at young ages and have known people who have lived into their hundreds. I want to be one who lives a long life.”

GYN surgical specialists can often see women sooner because they are focused entirely on surgery. Each patient gets detailed, in depth attention from Dr. Natalya Danilyants MD and Dr. Paul J. MacKoul. This personalized care helps patients understand their condition and the recommended treatment so that they can have confidence from the very start. Our surgeons have performed over 20,000 GYN procedures and are constantly finding better ways to improve outcomes for patients.