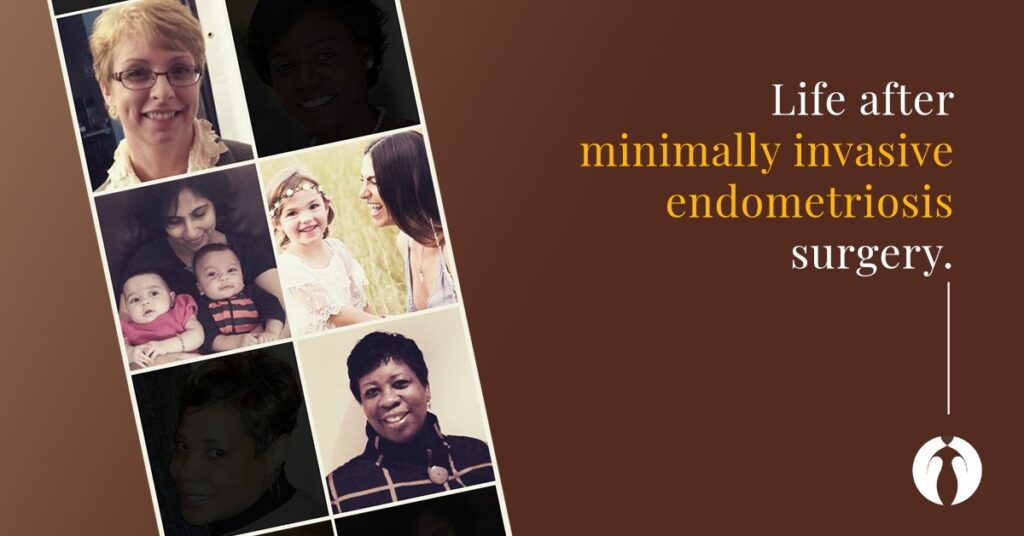 Endometriosis is a complex GYN condition that can be difficult to diagnose. Many women experience intense pain associated with their period, some even as early as their first menstrual cycle. Knowing the symptoms of endometriosis can help women get a head start on a diagnosis, and early treatment can prevent long-term complications.

On average, women with endometriosis often wait a decade for a proper diagnosis. Delaying diagnosis and treatment gives endometriosis time to do a lot of damage. If diagnosed and treated early, there is a higher chance that the treatment will be more effective in relieving pain and there will be less damage to the reproductive system, improving fertility.

Endometriosis has no cure but can be managed when treated by a laparoscopic GYN specialist. At The Center for Innovative GYN Care (CIGC®), our specialists developed the state-of-the-art DualPortGYN® technique, which can minimize pain and recovery time for laparoscopic endometriosis removal.

The following group of women took control of their GYN health after years of suffering and found relief with the specialists at CICG.

For nearly three years, Michelle had bleeding that worsened progressively with each cycle, and not in the usual way. Rectal bleeding is not usually considered a sign of a gynecological condition, but in her case, it coincided with every monthly period. Michelle consulted three different doctors: a general practitioner, a gastroenterologist, and an OBGYN — none of whom recognized the signs of endometriosis. It took several attempts before finding a specialist to perform what would be a life-changing minimally invasive endometriosis excision and DualPortGYN hysterectomy.

“In the beginning, I didn’t associate the pain with endometriosis,” said Michelle. “I didn’t have the doubled over pain I would have expected. My mother had severe pain in her 50s from endometriosis.”

Endometriosis can take on many forms, causing pelvic pain, pain in surrounding areas, and abnormal bleeding. Since it can be anywhere in the body outside of the uterus, the severity of pain can vary depending on where it is located.

After the last appointment, Michelle was sitting in her car, in tears, when she heard HOT 99.5 DJ, Danni Starr, talking about CIGC. She had heard the commercial many times before but after a disappointing appointment, she decided to call.

“When I talked to Paul MacKoul, MD, he didn’t blink an eye. He said that he had seen this before and that most likely there was endometriosis on my bowels. He scheduled the surgery for December 7th, and I finally felt like someone was willing to help me.”

Our next patient, Dorran went through various treatments over the past 17 years before she found the specialists at CICG. She had open surgery for fibroids in 1999, a hysteroscopy procedure in 2006, and another hysteroscopy in 2014 for adhesions, polyps, and a closed cervix.

“I didn’t understand why I was always in pain. Sometimes people are not persistent enough. I was sick for a while,” said Dorran. “I went through ovarian cancer testing. I was so stressed, wondering if the pain was a figment of my imagination.”

Everything changed when Dorran met Natalya Danilyants, MD, and was diagnosed with endometriosis. Dorran most likely had endometriosis for years before, as it is unlikely to develop after the onset of menopause. Endometriosis is triggered by estrogen, which diminishes after menopause. However, women with advanced stage endometriosis can often have long-term pain associated with the damage that endometriosis caused before menopause.

Learn more about Dorran’s long road to recovery and the minimally invasive hysterectomy that relieved her endometriosis.

Michelle and Dorran were not planning to have children, so a minimally invasive hysterectomy was their best option. However, for our next two patients, maintaining fertility was a must.

For nearly a decade, Bela tried everything to have a child with her husband — and after 15 fertility treatments along with countless surgeries, her next step was to try a donor. But first, endometriosis excision at CIGC was the last attempt before seeking donor eggs.

GYN conditions like fibroids, endometriosis, pelvic adhesions, uterine polyps, uterine septum, and inflammation of the fallopian tubes (hydrosalpinx) can affect the healthy trajectory of a pregnancy. Many women have difficulty conceiving, suffer through multiple miscarriages, or deliver early — putting the mother and baby at risk. And many of these women often discover that they have a GYN condition that could have been treated.

Endometriosis experts are better at identifying and removing all lesions, endometriomas, and pelvic adhesions that can develop from years of inflammation. Not all OBGYNs are trained to recognize the symptoms or to thoroughly remove endometriosis. They often resort to performing hysterectomies, which are not always effective in treating the pain.

“I had undergone a laparoscopy and a myomectomy in the past, and the surgeon did not find endometriosis. He found my tubes were blocked from scar tissues and recommended that I go with in vitro fertilization (IVF) to have a baby. I went through four IVF cycles in Virginia and five cycles at a clinic in New Jersey.”

Ectopic pregnancies occur when the embryo cannot pass into the uterus and stays in the fallopian tube, or implants. These are usually discovered before the eighth week of pregnancy. Even though they are caught in the early stages of pregnancy, ectopic pregnancies are life-threatening to the mother, and the baby cannot survive.

“I decided to do one last IVF, my 10th cycle with my own eggs before throwing in the towel. I consulted Dr. Paul MacKoul and discussed my case with him. We decided to do another diagnostic laparoscopic procedure to take a fresh look at my uterus and tubes. Dr. MacKoul discovered stage one endometriosis during the laparoscopy. It was around the ureters. While that meant that I had to deal with another issue that caused infertility in addition to several issues I already had, I was glad to have the endometriosis found and removed!”

Free of endometriosis and with the help of IVF, Bela had her first ever successful pregnancy after 10 years of trying.

Read more about Bela’s endometriosis treatment and the birth of her twins.

Dr. MacKoul helped our next patient, Brittany, start the family she always wanted by removing endometriosis, pelvic adhesions, and a cyst.

“I had been trying for four years to have a baby. We were thinking about alternatives to natural conception. I went to my doctor after years not being able to get pregnant. At that point we decided to wait and see what happened. After waiting, I did get pregnant, but I had a miscarriage.”

Brittany was diagnosed with a dermoid ovarian cyst when she was a teenager. When she went to a doctor more recently, an ultrasound revealed the cyst had more than doubled in size.

“I had surgery with Dr. MacKoul to remove the dermoid cyst, and it was discovered during that surgery that I had endometriosis and bowel adhesions. They cleaned me all up. Following my initial surgery, we returned to my doctor and they suggested IVF. My husband and I wanted to try on our own first — I got pregnant within a month.”

Read more about Brittany’s complex GYN surgeries and her path to pregnancy.

Using DualPortGYN, the CIGC approach to endometriosis excision removes the endometriotic lesions while preserving the uterus, tubes, and ovaries for women who wish to maintain fertility, or who have a milder disease. There are just two small incisions placed in the midline, so recovery from the procedure is fast.

Women who suffer from abnormal bleeding or pelvic pain due to complex conditions like endometriosis, fibroids, adenomyosis, and others can be treated safely with DualPortGYN. DualPortGYN is among the safest and most effective minimally invasive gynecological surgery available worldwide. It is faster and more efficient than standard laparoscopic or robotic surgery. With the help of the CIGC surgical specialists, you don’t have to wait years for a diagnosis and treatment for your complex GYN condition.

PrevPreviousWomen Want The Best In Expert GYN Surgery
NextWTOP | Heavy Monthly Bleeding: When Is It Too Much?Next
Related Articles