Fibroid Removal Surgery Made Getting Pregnant Possible for Tiffani 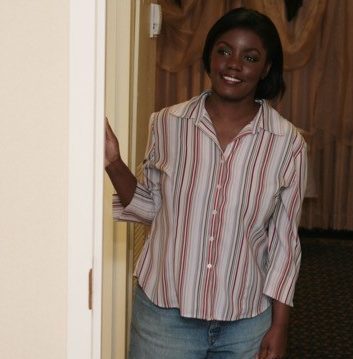 In 2012, Tiffani D. (Fort Washington, MD), was a deputy digital director for a political campaign, and while filming a video she was running, she fell into a huge sinkhole while carrying her equipment. It was that accident that led to her ultimately discovering she had fibroids.

“I think my bags acted as a cushion,” said Tiffani. “My body literally slammed into the concrete. I heard a bunch of people gasping behind me. I continued on with the shoot, in a whole other zone, I was so pumped up on adrenaline. Four or five hours later, my back was burning. I went to the ER and had an x-ray. I had a hip contusion, some chest contusions, and other muscular bruises. Eventually all of those went away, and after the end of the campaign, I came back home. I was lugging my bags at the airport, and I tried to lift it and I felt something rip. I managed to get home and I signed up to talk to a couple of doctors. They set me up for physical therapy. As I was doing the therapy I started bleeding which went on for about a month. I went to see a gynecologist.”

Tiffani discovered that she had fibroids, and that the prescribed physical therapy put her in a position that, due to the location of the fibroids, caused her extreme pain.

Normalizing the Pain of Periods From An Early Age

From an early age, Tiffani had difficulty with her cycle, but was unaware that there was anything abnormal about it. She was told she had endometriosis while she was a teenager.

“I had no idea I had fibroids. Nothing indicated to me that I had them. For 20+ years I had a heavy period and occasional clotting, but it didn’t strike me as being abnormal. The doctors said I had endometriosis, but that would have required surgery and I wasn’t going to do that.”

Period pain is not normal, but with no frame of reference, many young women who experience difficulty early on are not aware that there is a problem. The normalization of pain associated with periods can lead to long term damage within the pelvic cavity.

“I just took pain medicine when I knew it was coming on. I always had something in my purse. I came from a military family so a lot of it was just suck it up, not knowing that you have a condition that will affect you long term. I was used to the pain, so painful or very heavy periods throughout my life never made me think it was fibroids.”

“I went to 3-4 gynecologists at this point when one of them saw on my ultrasound that I had fibroids. As I was still doing physical therapy, one of the positions caused radiating pains from my uterus and it would go on for two weeks. This is what I imagined was like being in labor. I had to take a cocktail of drugs to knock out the pain.”

One of the fibroids was near Tiffani’s spine.

“I went around the DC area looking for a gynecologist to help. One of my colleagues mentioned Dr. Natalya Danilyants, MD to me and she really liked her. I definitely wanted to have kids, but my first priority was to get rid of the pain and get my menstrual cycle back on track. Dr. Danilyants said I had fibroids scattered all over my uterus, but she reassured me that it’s not like back in the day when you had to have a large bikini cut, it can be a laparoscopic procedure.”

“I had surgery at 36 and I feel like it was because I fell that I discovered I had this problem.”

“About 2 or three months after the surgery, when I was laughing I felt like I ripped something. I went back to Dr. Danilyants thinking it was from the surgery, but it turned out that I had scar tissue throughout my pelvis.”

Pelvic adhesions, or scar tissue, are common in women who have endometriosis that is extensive, or left untreated. Scar tissue can grow between two organs in the pelvic area and cause significant pelvic pain. Pelvic adhesions can occur around the bladder, bowel, ureter, uterus and ovaries.

“It was attaching my uterus to my bowel. Dr. Danilyants performed an endometriosis excision procedure to clean out all of the scar tissue. She used dissolvable patches to prevent new scar tissue from forming and I really feel like they helped with the healing process.”

“We were trying to conceive about 6-9 months after the scar removal surgery. We tried for a while. After 6 months, we decided to try fertility treatment. My hormone levels were all over the place. I thought I was just stressed. Most of my numbers settled down. My ovarian reserve was low. The last specialist said that I had a 15 to 24% chance of conceiving naturally and that I was going to need IVF. The specialist didn’t know me very well since to me, that was a challenge. In the beginning of 2016, I made it a priority to look at the medical journals. I’m sure I have one viable egg in there. If I still have viable eggs inside me, then we will try a few more months.”

“January 2016 to April 2016 I was everything I could to take care of myself, drinking tea, eating really well. I found a supplement that’s supposed to repair the mitochondria in my DNA and I was thinking it might repair my eggs. Together with prenatal vitamins and this supplement, and monitoring my fertility cycle we managed to get pregnant in July 2016.”

Tiffani and her husband are expecting their first child in early 2017.