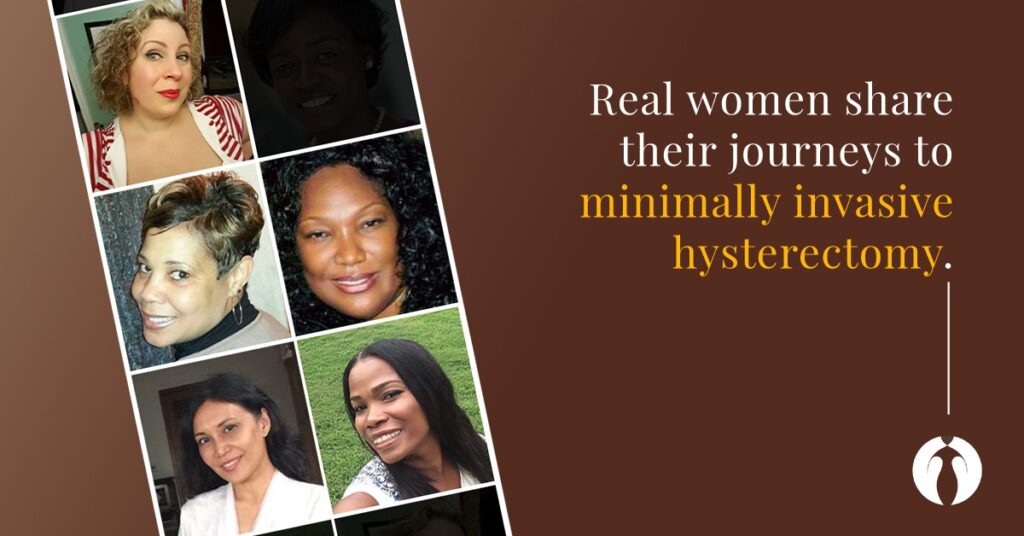 Women from all corners of the globe suffer from complex GYN conditions — and many of them don’t know where to find the expertise they need. In many cases, women are told that they require a hysterectomy to treat their condition, which may be hard to hear. However, choosing the right surgeon to perform that procedure can determine how long the recovery is, how much pain will be endured, and the potential for complications during and after the surgery.

The Center for Innovative GYN Care (CIGC®) specialists treat women from around the world using state-of-the-art techniques. The CIGC travel program was created to offer a solution for women who need advanced surgical specialists but don’t have any in their area. Access to this kind of care, including minimally invasive hysterectomy for fibroid removal or other complex conditions, can help women take back control of their lives — and for the women below, it changed their lives forever.

TONI AND DARMETTA: SISTERS WITH THE SAME SYMPTOMS, DIFFERENT SURGERIES

Toni and her sister Darmetta were experiencing exactly the same symptoms. After turning 40, their menstrual flow increased and lasted longer. Taking different paths to surgery, Toni’s experience was vastly different from that of Darmetta.

Toni spoke with her doctor about different options to alleviate her menstrual cycle stress. The only option Toni’s OBGYN gave her was a hysterectomy, either with a robot or as a bikini cut open procedure.

“I couldn’t take off work for six to eight weeks, and I didn’t want a long incision or discomfort from major surgery; however, after my menstrual cycle got worse, I finally agreed to a hysterectomy,” said Toni.

Desperate for a second opinion, Toni began doing research online and found CIGC. She discovered that this option wouldn’t require her to take off work for six to eight weeks. The only problem was the distance between Texas and Maryland, where CIGC is located.

Toni flew to Maryland with her mom for surgery with Dr. Danilyants.

Read more about Toni’s journey to CIGC for a DualPortGYN® hysterectomy and Darmetta’s experience having an open surgery with her OBGYN.

Taking the trip from Texas to Maryland may seem like a big leap, but it’s nothing compared to how far the woman from our next story, Dwina, traveled for her health.

What would make a patient bypass all of the surgeons in her home city and travel all the way from Jakarta, Indonesia to CIGC in Maryland for a hysterectomy for fibroid removal? The answer: advanced laparoscopic fibroid removal techniques developed by world-renowned surgical specialists.

Dwina was about to undergo surgery in Jakarta when her surgery was postponed, and she had more time to understand her options. After being advised that she wouldn’t be able to have minimally invasive surgery, Dwina felt like it was her fault because she waited so long.

“I have a position that keeps me very busy. But after having the time to really think about it, I knew I wanted laparoscopic surgery,” said Dwina. “Especially after I learned that the risk of conversion to an open surgery with the surgeons in Jakarta is high.”

Around the world, women who suffer from complex GYN conditions have a higher risk of laparoscopic surgeries converting to more painful open procedures when complications arise. Open procedures can mean longer recovery time and more pain. While doing research online, Dwina found CIGC. Although the website provided a promising solution, America seemed too far away. Dwina continued looking closer to home, but no one could assure her that it wouldn’t convert to open surgery.

The advanced techniques developed by CIGC founders Paul MacKoul, MD, and Natalya Danilyants, MD, make it possible for women with complex conditions like large fibroids, an enlarged uterus, or extensive endometriosis to have laparoscopic — or minimally invasive — procedures without the risk of converting to an open surgery.

“I took a chance and emailed CIGC. I spoke to Dr. Paul MacKoul. He said that he would be able to take care of me. I wanted to take the earliest possible date. What really made me decide that this was the right destiny for me was I had a friend in Washington, D.C., and she said it was five minutes from her home. At that point, I realized I had to go. The conversion rate at CIGC is zero — it’s all laparoscopic — and for me that was the best news ever.”

Our next patient, Heather, was ready to get a hysterectomy for her fibroids and, like Dwina, wanted to be sure she was getting a minimally invasive surgery.

ONLY AFTER HYSTERECTOMY AT CIGC, HEATHER REALIZED FIBROIDS HAD CONTROLLED HER LIFE

In 2011, Heather was diagnosed with four small- to medium-sized fibroids — the largest being about the size of a golf ball. Even then, she was considering a hysterectomy, but choosing the right procedure was important.

“My doctor suggested doing a bikini cut hysterectomy and stated that was the only method that would work since I have fibroids. Other treatment methods were suggested, such as fibroid removal, injecting pellets into them to stop the blood flow, and at the time, the experimental method of blasting them with MRI waves. I was interested in the hysterectomy since it is a permanent solution to the fibroids. I never wanted to have children; however, I did not want to get a bikini cut hysterectomy. So, I went the least invasive route and treated my fibroids with my birth control pills.”

Heather tried not to let the pain she was experiencing prevent her from living life, but it wore her out. She didn’t realize just how much the fibroids and pain were holding her back until they were gone.

Tonya saw a major improvement in her life after her minimally invasive hysterectomy at CIGC.

“I knew I had fibroids. In 2009, I had to start taking iron pills. The results of my physical then showed that I was extremely anemic. For over two years, my cycle was getting heavier and heavier. They were always seven days, but then they would linger for an additional three to four days.”

Tonya’s menstrual cycle started taking over her life and she discovered that in addition to fibroids, she also had adenomyosis. After ending up at an urgent care facility for losing too much blood, Tonya decided to see her doctor and was referred to Dr. MacKoul.

“I had a hysterectomy at CIGC with Dr. MacKoul. And it was so easy! I liked the private facility because I had one-on-one kind of care. When I came out of the surgery, there was minimal bleeding, minimal pain. I came home the same day, and I only took the heavy painkillers the first day after. I just took ibuprofen the rest of the days. Now, you can’t even see where the stitches were.”

GYN conditions can hold you back from living your life to the fullest. They can interfere with relationships, exercising, traveling, school, or work. Today, Tonya has more freedom than ever.

All of these women found freedom from their complex GYN conditions with minimally invasive surgery at CIGC. The advanced techniques offered at CICG allowed them to receive the medical attention they needed without sacrificing time or suffering unnecessary pain.

DualPortGYN minimally invasive hysterectomy is performed in an outpatient setting so that women can return home the same day. Incisions are tiny and placed in cosmetically discreet locations. One five-millimeter incision is placed at the belly button, and another five-millimeter incision is placed at the bikini line — making them practically invisible after they heal. These incisions go through the midline, not through the muscle; so, recovery is faster. The incisions from a DualPortGYN procedure are so small that in many cases, CIGC patients are back to work in less than a week and scars are practically invisible within one to two months.