The Guise of Choice: The U.S. Female Sterilization Controversy 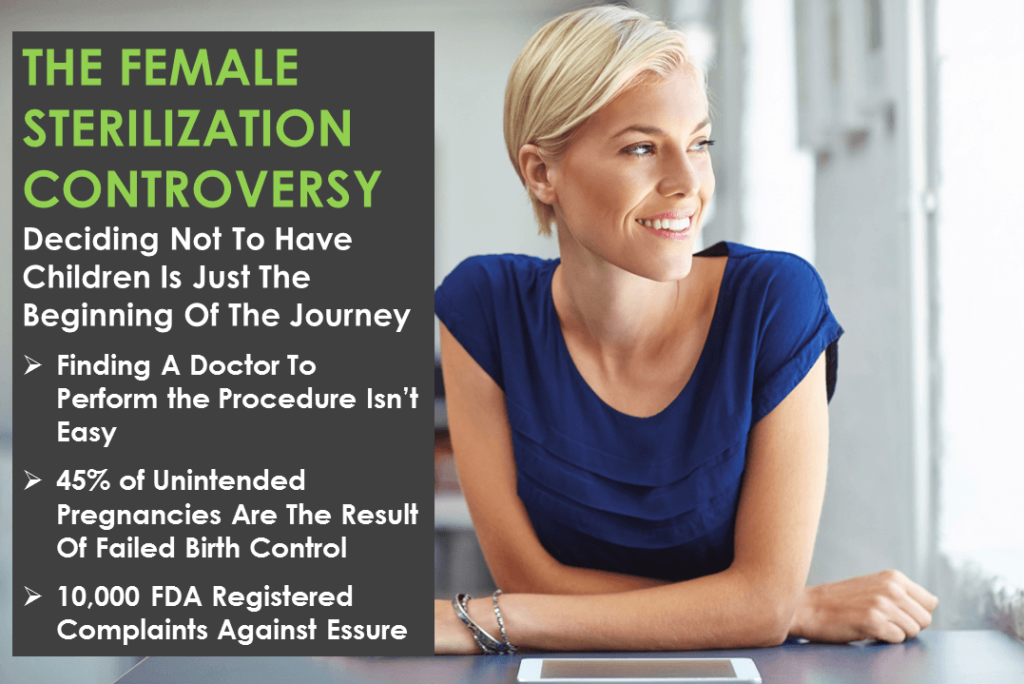 Choosing whether or not to have children is an important and personal decision that both women and men make. When the decision is to not have children, the options for women are complicated, and access is problematic. Across the board for women, between mandatory wait times, and layers of requirements based on individual states and insurance policy restrictions, female sterilization has become a controversial topic.

A non-surgical alternative, Essure, was introduced to the market, that allowed in-office placement of nickel-titanium coils into fallopian tubes without the need for incisions. It became the standard of care for sterilization. Organizations like Planned Parenthood that don’t perform surgical procedures widely adopted the device.

However, over 10,000 complaints have been filed with the Food and Drug Administration (FDA) over the side-effects that are allegedly the result of Essure coils. These complaints have led to new proposed legislation that would require a shift in how the FDA brings new devices to market, and reporting of complications or failures.

On today’s article on WTOP, the Female Sterilization Controversy is laid out in detail, from mandatory waiting periods, lack of access due to physicians unwilling to perform the procedure, and the risks associated with the alternative method.

THE GUISE OF CHOICE: THE U.S. FEMALE STERILIZATION CONTROVERSY

In doctors’ offices across the United States women are frequently faced with obstacles when pursuing female sterilization. Compared to male sterilization, it is common for women requesting tubal ligation procedures to be told that they must wait for 30 days after signing a consent form, or, have a physician who is unwilling to perform the procedure altogether. For federally funded health insurance plans, the 30-day waiting period is a mandate…

THE RATES OF BIRTH CONTROL FAILURE

Over the last decade, statistics show that nearly half of all births are unintended, and the rate of unintended pregnancies that occur due to failed birth control methods is high.

“Of the 6.4 million pregnancies that occurred in the United States in 2001, 49% were unintended. Of these 3.1 million unintended pregnancies, 52% (1.6 million) occurred in women who were not using contraception during the month of conception, whereas the remaining 48% were contraceptive failures.” National Institutes of Health: Sterilization in the United States – Deborah Bartz, MD, MPH and James A. Greenberg.

…Doctors are trained how to place the coils, but not all have had success. There are more than 6,000 reports included in a June 2015 report from the Food and Drug Administration (FDA) Manufacture and User Device Experience (MAUDE) database that shows that in addition to the device breaking, doctors need better training on placement and understanding the potential risks.

This is the most controversial of methods. Essure became the standard of care in recent years, particularly for Planned Parenthood, because it can be placed in the patient in a non-surgical setting. However, over 10,000 complaints have been reported to the Food and Drug Administration by women who have had Essure coils, and the side effects and symptoms have extended well beyond the pelvic cavity. Nearly 30,000 women have joined Essure Problems, an online support network for women who have been negatively affected by the device.

The number of complaints filed with the FDA, and the collective outcry has led to the introduction of new legislation by Republican Congressman Mike Fitzpatrick from Pennsylvania, and Democratic Congresswoman Louise Slaughter from New York. On Wednesday June 8, 2016, Rep. Fitzpatrick announced the package of bills aimed at strengthening the FDA’s medical device review process and increasing accountability for dangerous products.

Angie Firmalino, founder of Essure Problems spoke to the amount of hard work she and her thousands of members have put towards getting the bill introduced.

“It’s about an unsafe medical device and women not having any recourse”, said Firmalino. “For the longest time doctors weren’t listening, not believing that this tiny little device could be causing all of these symptoms…”

“Due to the thousands of registered complaints to the FDA regarding Essure, we chose to only offer surgical sterilization procedures at our facility,” said Dr. Paul MacKoul, MD, The Center for Innovative GYN Care. “The goal is to reduce the overall risk, and our procedures are performed with 5MM incisions in an outpatient setting so patients go home the same day, with very little down time.”

Women who experience negative reactions to Essure need to have the coils removed by a specialist. Incorrect removal can cause permanent damage to reproductive organs, and increases the risk of needing additional surgery. Many women end up requiring a hysterectomy, salpingectomy (removal of fallopian tubes) or salpingo-oopherectomy (removal of fallopian tubes and ovaries). Depending on the location of the coils at the time of removal, it may be necessary to perform additional procedures. Having a laparoscopic hysterectomy, or other minimally invasive procedure performed by a fellowship trained specialist who is familiar with the risks gives patients better results.

Read the full article. |  The Guise of Choice: The U.S. Female Sterilization Controversy