The Battle Over Essure | The Controversy 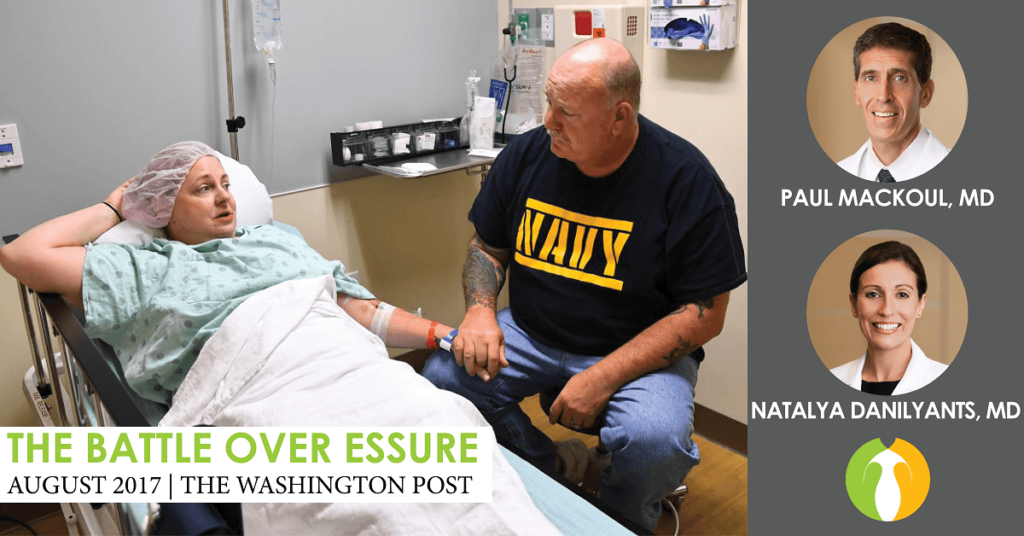 In July 2017, Washington Post Magazine was devoted to the controversial permanent birth control device, Essure. Over time, many women who have had the device placed have experienced negative side effects. The article tracks the experience of Keisha Carney, Angie Firmalino and CIGC patient Melissa Davis-Gilbert who had Essure. In addition the article takes a comprehensive look at the history of the device, a review of the scrutiny prior to coming to market by the FDA, and the advocacy champions who led the charge to bring the makers, Bayer, to a review hearing that resulted in a black box warning.

Excerpt from The Battle Over Essure:

“Among the reports are nearly 9,000 surgical removals of Essure, mostly by hysterectomy. ‘That’s a lot of surgeries for a device that’s considered minimally invasive,’ says Madris Tomes, a former FDA analyst.”

In 2015, the FDA held a hearing on the device, which, Tomes says, was probably a direct result of the women’s persistence. “There has to be a pretty big outcry for there to be a public meeting,” she says. In 2016, that hearing resulted in a “boxed warning” about possible side effects, including persistent pain and allergic reactions. Black box warnings, as they’re commonly called, are among the strongest action the FDA takes to warn the public about potential dangers of a drug or device, and they are exceedingly rare for devices, according to Suzan Onel, a lawyer with Kleinfeld, Kaplan & Becker who has 27 years of experience in FDA device law. The FDA added the warning, it said at the time, because it believed “that some women are not receiving or understanding information regarding the risks and benefits of permanent, hysteroscopically-placed tubal implants that are intended for sterilization.”

The warning — coming 14 years after Essure went on the market and two years after Keisha had it implanted — was a major victory for anti-Essure activists. But it also left a number of unresolved questions: How did this device come to market? What made it so popular? And should women continue to use it?

Paul MacKoul, MD and Natalya Danilyants, MD On The Need For Complete Essure Removal Through Hysterectomy

“Yet another issue the Essure Problems administrators believe got short shrift was removal of the device. A Conceptus representative testified at the 2002 hearing that taking it out would require cornual resection — removing the area where the fallopian tubes meet the uterus. But doctors have since found that’s ‘not easy,’ says Myron Luthringer, a Syracuse, N.Y., OB/GYN who says he has removed hundreds of the devices. He explains that the coils are fragile and break apart, that the tissue in that area is difficult to repair and that PET fibers have often embedded in the surrounding tissue. For those reasons, he says, he tends to perform a hysterectomy, removing the uterus and cervix, as well as the fallopian tubes. Other physicians do as well. ‘We really advocate that the right procedure is hysterectomy,’ says Paul MacKoul, an OB/GYN at the Center for Innovative Gyn Care in Rockville. But hysterectomy — and cornual resection, for that matter — require the very element many women who chose Essure were trying to avoid: surgery with anesthesia. ‘Anything that’s designed to be permanent is very difficult to take out,’ notes MacKoul’s partner and fellow OB/GYN, Natalya Danilyants.

Fourteen months after a September 24, 2015 FDA hearing, Essure was issued a black box warning. The warning alerts patients to reported device migration, perforation, persistent pain and “suspected allergic or hypersensitivity reactions.” The warning and a patient-doctor discussion checklist appear in the 27-page patient information booklet that all women considering Essure are supposed to receive, to be signed by both doctor and patient. (The checklist includes statements such as, “I understand that should my doctor and I decide that Essure should be removed after placement, an additional surgical procedure may be required. In complicated cases, my doctor may recommend a hysterectomy.”)

The hearing included scathing comments from panelists about the lack pre-screening for a nickel allergy.

“The panel members themselves had some tough comments for the FDA and Bayer, especially on the issue of nickel sensitivity. ‘How do we not have data on nickel allergy when we have a device that’s 55 percent nickel and 20 percent of women — approximate numbers — are known to be nickel allergic?’ asked Schalock, the Boston-area dermatologist and expert in metal hypersensitivity, who served on the panel in 2015.

The FDA also ordered Bayer to conduct another clinical trial, this time with a control group: 1,400 women will get Essure, 1,400 will have a surgical tubal ligation, and they’ll be followed for three years. The results are due in 2023.”

“Sales, meanwhile, seem to be falling domestically: According to Athenahealth, a medical billing management company, sales of Essure among the 1,938 U.S. medical providers in its database who implant it have dropped by 70 percent since 2010. A Bayer representative said in an email that the company ‘will discontinue distribution for commercial reasons in most of the countries in Europe, Latin America and Canada and in the few markets in Asia Pacific where the product is commercialized.’ The company attributes this to low sales, ‘nothing related to safety.'”

Read the full article | The Battle Over Essure

The Guise of Choice: The Female Sterilization Controversy