From LA to DC: Laparoscopic Hysterectomy for Large Fibroid Removal

Regina R., Waited For A Decade To Treat Her Fibroid; As It Grew, It Filled Her Abdomen 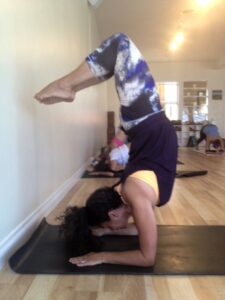 “My gynecologist told me I had fibroids and needed to have a hysterectomy, but that started 10 years ago, and I wasn’t ready to hear that then,” said Regina R., CIGC laparoscopic hysterectomy patient. “Since I wasn’t having any symptoms, no heavy bleeding (up until the last one that I had, my periods were completely regular), I didn’t have back pain, I just went along my every day life. Until the beginning of May.”

Regina found a doctor in Beverly Hills, CA who said he could shrink fibroids with a tool that he had invented.

“I had an ultrasound with this doctor, and he asked me if I was okay lying on my back. I said I was fine. All of a sudden he started changing his tune. He said ‘I can’t do the procedure on you, because there is literally no room in your abdomen to even put the tool in there. Your uterus is the size of 30 week pregnancy.’ He was trying to figure out how that could be inside of me. He said ‘You probably don’t eat.’ I told him I’m a foodie, I track down food, I finish my plate, I’m not one of those people who just has salads. He said, ‘Well I could explain it if you were 5′ 10″, not 5’4″, literally, you shouldn’t be walking. You should have back pain, acid reflux.’ and he was looking at me in disbelief. That freaked me out. He said ‘You really need to take care of this. You can damage your kidneys. Your organs don’t have any room. The fibroids have filled in what ever space was left.'”

Fibroids themselves are not seen as life threatening, as they are non-cancerous. However, the resulting symptoms can be extremely dangerous. Women have suffered from anemia – with some requiring multiple blood transfusions, damage to other systems, including kidneys, veins, and babies are lost to miscarriages, have been born prematurely, or are never conceived.

“I drove home so upset. All of a sudden I was feeling the fibroid, whereas before this I hadn’t even noticed it. I do yoga 4-5 times per week. I was doing backbends and running around. I do power yoga for an hour and a half every day. I was doing 50 sit-ups at one point, and doing arm balances and headstands. I’ve been doing it for 6 years and I’m pretty advanced.”

“Once I got home I knew I had to take care of this. This particular doctors solution was to take hormones that were available in Canada, but they would only shrink it a little bit. That wasn’t a real option, because even if it shrunk halfway it was still really big. At first, you think of all of these other things, holistic ways. The trauma of open surgery wasn’t something I wasn’t willing to go through, especially still not having any noticeable symptoms, except that I didn’t have a flat stomach. It was pure vanity that started the whole thing. I still kept feeling like I didn’t need to do this, but at the same time I knew I did.”

Choosing CIGC For A Laparoscopic Hysterectomy

“My gynecologist would only be able to perform an open surgery. Four to five days in the hospital, eight week recovery. Everyone was saying you live in LA, you have Cedar Sinai, you have UCLA, but they all do daVinci with the power morcellator, and that wasn’t an option for me, because if I had any form of cancer, I didn’t want to take that risk.”

Regina found The Center for Innovative GYN Care through an internet search trying to find an alternative to open surgery.

“Reading all of the blogs and hearing these women’s testimonials, I realized I could do that. There is the expense of flying and hotel, but in the end it’s my body. I called and had a phone consultation with Dr. Paul MacKoul, MD. His reaction was so matter of fact. He had done hysterectomies on women with a uterus this size and larger. My only options were open surgery here or flying to Washington, D.C. It was a no-brainer. After reading every person’s comments, and blogs, and procedures, and looking up reviews on both doctors, I felt comfortable enough to say ‘I’m doing it.’ Mentally, I was now feeling the fibroid. I was ready to get it out of me and move on.”

“I have a friend who is a gynecologist, who just told me to have the open surgery in LA. She said there was no way they could remove a uterus that big laparoscopically. My husband is good friends with her husband, and he was at their house prior to it. She kept saying ‘There’s absolutely no way they can do that. Don’t let her go!’ My husband stood firm saying ‘She’s done her research, I trust her and back her up.'”

The CIGC surgeons make sure that the patients are safe from the beginning. A DualPortGYN laparoscopic hysterectomy for a large uterus is one of the most minimally invasive GYN surgery techniques available. DualPortGYN was developed by the minimally invasive GYN specialists at CIGC to help women heal faster and created a safer procedure in the process. Hysterectomies performed with DualPortGYN take advantage of specialized techniques that help to control blood loss and map the pelvic cavity. Hysterectomies are performed using just 2 small incisions no larger than a paper cut through the midline. This means that the incisions do not have to go through the muscle, and patients experience less discomfort as they heal.

“Open surgery was never even discussed. He does this surgery all the time, and it was business as usual. The phone consultation was very direct. I wanted someone straightforward for whom this kind of surgery is no big deal. I want to be one of a thousand, not one of a few. That was such a comfort to know that he’s doing this all the time.”

“I arrived on a Wednesday, had my surgery in the afternoon at 5PM on Thursday. Everything went well. The surgery was complex. When Dr. MacKoul came back in to talk to me he said that the ureter was wrapped around the uterus on both sides and some of the other organs were on top of it. I definitely needed to take care of it. It was remarkable. My husband kept saying Dr. MacKoul is a miracle worker. Both the doctor in L.A. and Dr. MacKoul said that my uterus was bigger than my head. I obviously had a stomach, but I didn’t realize that the fibroid was going past my hipbone or my rib cage. It was the shape of a giant jellybean. After the surgery, my stomach is totally flat now.

“Our flight home was delayed and then cancelled. The woman at the boarding gate knew I had just had surgery. She got us a flight out of Dulles for 5:30 that evening. That flight got delayed by 2 hours. Keep in mind, at this point, I had only taken a Motrin. I was saving the major meds for the flight. I finally got into my house at 1:30 AM eastern time after leaving the hotel at 7:30 AM. As long a day as this was, my husband was worse than I was. The next morning I got up and got dressed and while I didn’t go to yoga class, I was able to be up and do things around the house.”

Realizing The Fibroid Symptoms She Had After The Surgery

“Now looking back, when I slept on my side, gravity would pull my stomach. And the first time after the surgery when I slept on my stomach, it felt weird not having that sensation. There were sensations that I got used to feeling, like with my back that I just learned to live with, that I wasn’t really aware of because it was such a gradual change.”

Confident In Her Decision To Travel To CIGC

“I’ve been taking it easy, I’m basically back to normal, I didn’t really take any pain medication except to go to sleep the first couple of nights home. I’m totally feeling fine! People come to see me and it’s so weird because you don’t look like you’ve had surgery! I keep forgetting that I’ve had major surgery, you feel the incision a little bit, but it’s not anything that keeps me from doing anything. Coming from a large city in LA where you can find an expert on everything, and having family and friends not understanding why I was going literally across the country for this procedure, my family especially was very uneasy. We are used to having everything within driving distance and even when I explained it to them, they couldn’t understand.”

“As the time got closer, it was a mental thing, I hadn’t met the doctor in person, I haven’t been to this hospital before, of course you get nervous. However, from the time that I called, to get information, to get my insurance approved, to speaking to the doctor, to having Emily call me and schedule the surgery, to the follow-ups for the lab work I needed, to the email communication, everything was so professional and so perfect. I didn’t have to worry about thinking about anything. The only thing I had to worry about was getting a flight and getting a hotel room.” 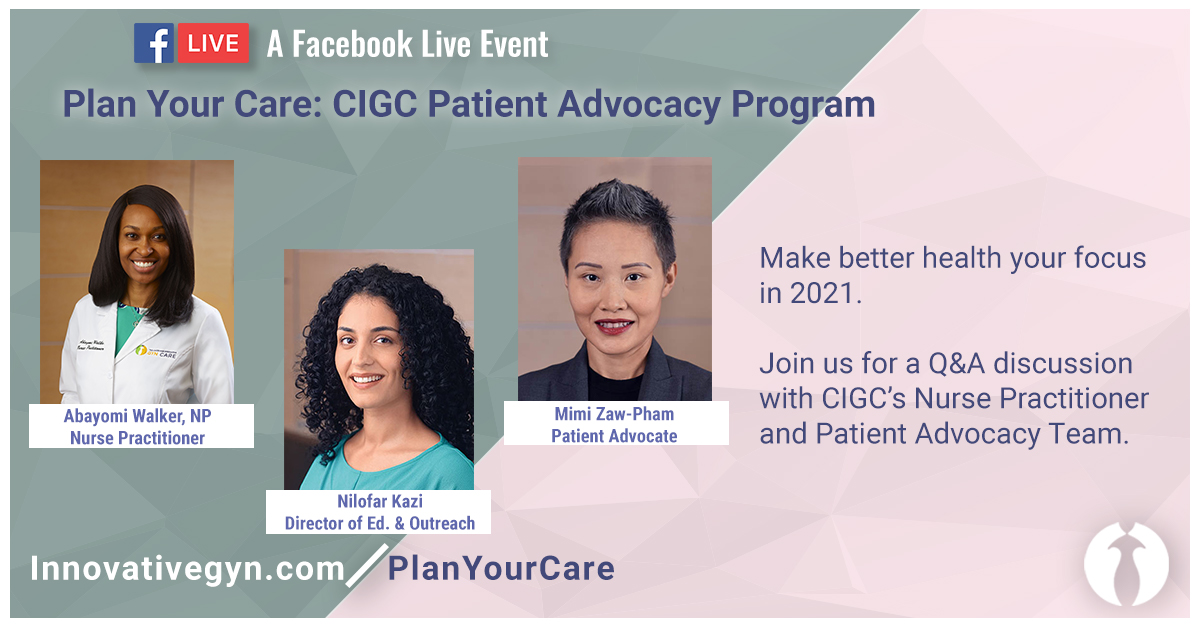 2021 is here and it’s time to plan your GYN care.   Thank you to CIGC Director of Education and Community Outreach Nilofar 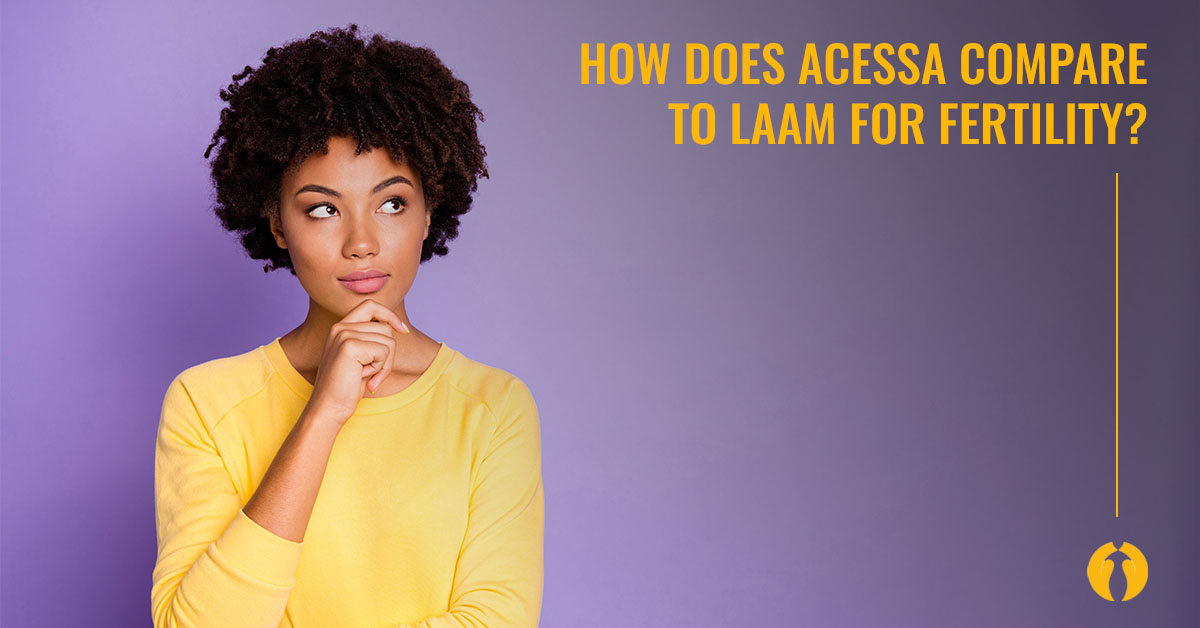 How the Acessa Procedure Compares to LAAM for Fertility

Uterine fibroids are noncancerous growths that affect about 80% of women by age 50. They can show up inside or outside of the