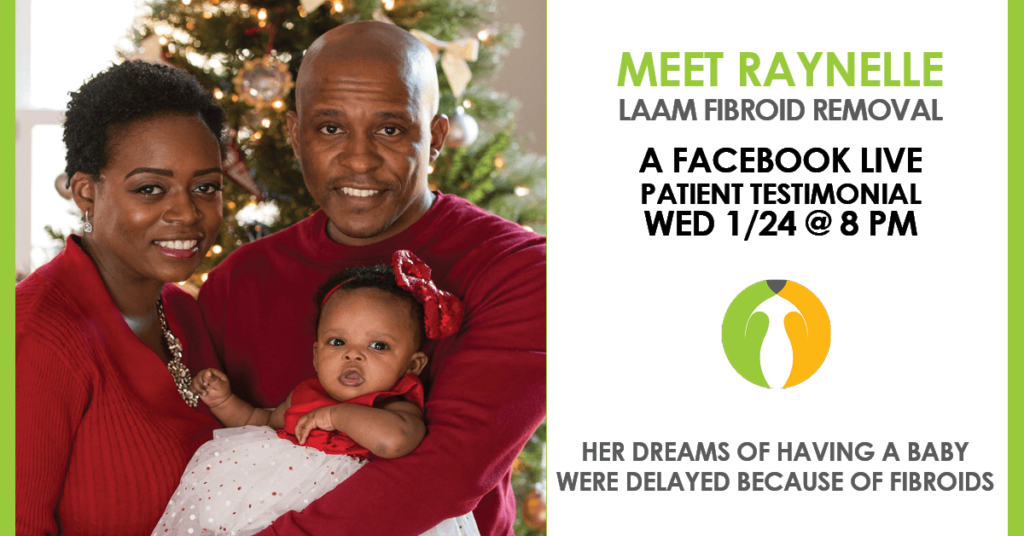 Join us January 24th at 8:00 PM (EST) on Facebook as Raynelle shares the next phase in her journey.

RAYNELLE: FROM FIBROIDS TO STARTING A FAMILY, A LIVE TESTIMONIAL

Raynelle had fibroids for years. They weren’t affecting her daily life, but as she discovered years later, they posed a threat to her ability to carry a baby. As years passed, the fibroids grew to the size of a small grapefruit or an orange. Local physicians in New Jersey were recommending an open myomectomy, with a large incision.

She researched her options and made the decision to travel to The Center for Innovative GYN Care in the Washington DC Area, for the advanced LAAM procedure with Dr. Natalya Danilyants. LAAM is an advanced laparoscopic myomectomy, using only 2 small incisions with a much faster recovery.

Raynelle went back to work 1 week after surgery and has been feeling great since. But there is much more to her story. Hear more about her journey, and getting her dream come true, in the live streaming!

A Threat to Fertility: The Quiet Symptom of Fibroids

“At first, I didn’t know anything was wrong,” said Raynelle. “I did not have any symptoms from my fibroids. I would get normal period pain, occasionally. During an exam, my uterus didn’t feel quite right, so my OB/GYN sent me for a sonogram.”

Early detection and minimally invasive fibroid removal is the most effective treatment for women who suffer with painful, prolonged, or heavy periods. However, many OB/GYNs or general practitioners advise women to watch them and wait, but to let them know if their symptoms change. However, this can be subjective, as a patient may not know what to look for if the fibroids aren’t causing overt or rapid changes.

Join us January 24th at 8:00 PM (EST) on Facebook as Raynelle shares the next phase in her journey.

RAYNELLE: FROM FIBROIDS TO STARTING A FAMILY, A LIVE TESTIMONIAL