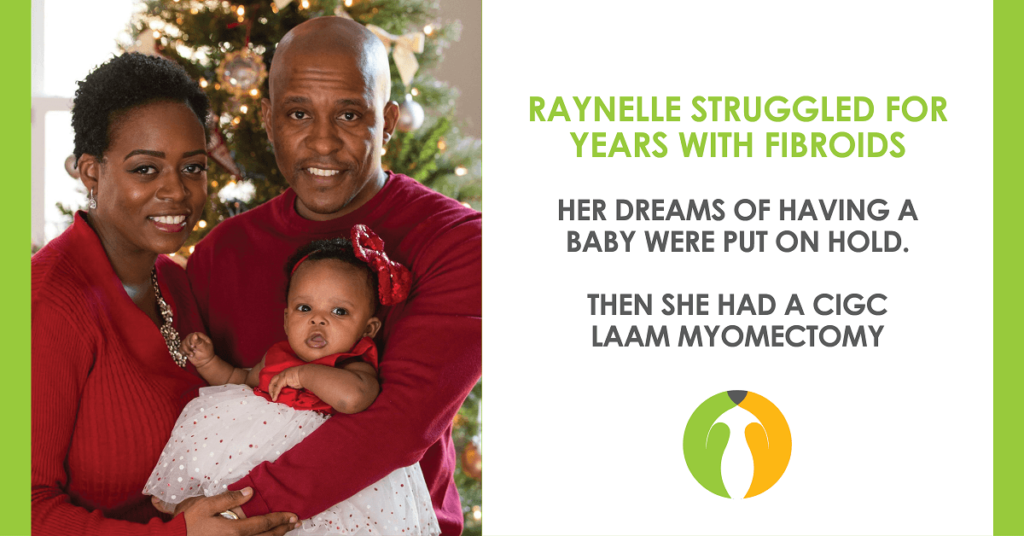 CIGC fibroid removal patient, Raynelle, came to The Center for Innovative GYN Care in 2015, and as she says in her Facebook Live video, “You guys already know the punchline, I have a beautiful baby girl! I feel like I’ve been given a beautiful gift of being able to have my daughter and I want to help other people who have fibroids, also.”

She discovered in 2008 that she had fibroids during a routine annual exam. The ultrasound showed that she had 2 fibroids about the size of golf balls, but the doctors said that she could just keep an eye on them. At the time she was having some back pain that they attributed to the fibroids, but that according to her OB, was nothing to worry about right now, since she wasn’t planning on getting pregnant any time soon.

Every year for her annual exam, she was also scheduled for an ultrasound to monitor the fibroids, but by 2015, without treatment, the golf balls had turned into grapefruit.

“My normal OB said since I wasn’t having any symptoms, where they were located, the fibroids shouldn’t affect my getting pregnant, but I wasn’t sure if I would stay pregnant,” said Raynelle. “I was worried about them crowding my uterus, taking blood and space from the baby. My OB said we shouldn’t experiment with this. She said she would perform a myomectomy, and that it would be 4-6 weeks to recover. I had started a new job, and thought it would be better to schedule the surgery around Christmas so it wouldn’t feel like I was out for 4-6 weeks, but we couldn’t come together on scheduling.”

A THREAT TO FERTILITY: THE QUIET SYMPTOM OF FIBROIDS

“At the same time I was struggling to schedule this with my OB, a friend of a friend, my sister, my mother kept saying you need to check out CIGC.”

“When I went to my consultation with Dr. Danilyants, she explained my fibroids to me in a few minutes, better than my doctor had for 7 years. She drew a picture of what was going on in my uterus.”

“For the LAAM procedure, she said I would be out for about a week, maybe two at the most. Better than that, the timing to have the surgery was just a couple of weeks after that consultation.”

“The number of fibroids that were actually removed was more than showed on the ultrasound. The image only showed two fibroids, but there were six that needed to be removed. The other four were hidden behind the two larger fibroids.”