A Mother’s Day to Celebrate After Fertility-Saving Fibroid Surgery 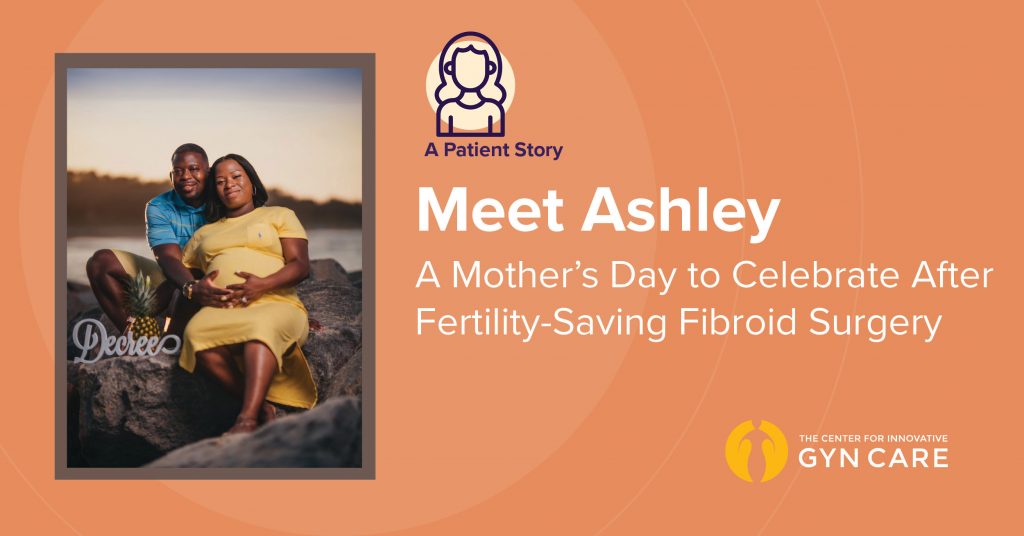 In December 2019, CIGC patient Ashley was pregnant — she just didn’t know it yet.

After undergoing the LAAM procedure to remove fibroids earlier that year, she traveled two hours from her home in Delaware to return to CIGC. She was scheduled for a procedure to check if her fallopian tubes were open because she and her husband were ready to start trying to conceive.

Before the test, CIGC’s Nurse Practitioner Abayomi Walker ran a routine pregnancy test. While Ashley waited for the results, she wondered if this would finally be her time to become a mother.

Suddenly, she was struck with an unexplainable feeling.

“I’m already in tears and feel a burning sensation flowing through my body,” Ashley said.

And she knew. She was pregnant. When Nurse Walker came back into the room with the pregnancy test results, she confirmed it.

“We don’t need to check to see if your tubes are open, because they clearly are. You’re already pregnant.”

Prior to her LAAM procedure, Ashley struggled with severe symptoms from fibroids that had filled up her entire uterus. Scans showed one large fibroid with other fibroids clustered around it. Her condition made pregnancy impossible to even consider.

Because of the fibroids, Ashley experienced heavy bleeding that was so severe she got into the habit of carrying around what she referred to as an “adult diaper bag.” Wherever she went, she always needed access to products like large tampons, super-sized pads and an extra change of clothes. She only wore black clothing because she was terrified of any other color showing leaks. Even just a 30-minute commute to work would result in flooding so intense she didn’t want to go. After constantly bleeding for a six-month stretch at one point, she started having suicidal thoughts. She knew she couldn’t continue to live like this.

After discussing her symptoms with her OBGYN, she underwent a procedure to remove the fibroids. But when she woke up, her OBGYN gave her bad news. He wasn’t able to remove the bulk of the fibroids in Ashley’s uterus. Ashley was discouraged, but also determined to find a better solution.

“I got myself together and told myself, ‘You need a game plan. What are you going to do?’” Ashley said. “In my spirit, I knew. I needed a second opinion.”

Live more than two hours away from a CIGC location? Learn about our travel program!

Seeking a Second Opinion from a Fibroids Specialist

Through some research on Google, Ashley found The Center for Innovative GYN Care. After reading through some of the former patient reviews, she called the office and set up a consultation. Just a few weeks later, she was scheduled for surgery with fibroids specialist Dr. Natalya Danilyants.

When seeking fibroid treatment, a specialist can provide options and procedures that a typical OBGYN doesn’t usually perform. While Ashley trusted her OBGYN wholeheartedly, she knew he wasn’t able to give her the minimally invasive surgery option she needed in order to completely remove her fibroids while retaining her fertility.

“A gynecologist isn’t a specialist,” Ashley said. “I didn’t just need a gynecologist, I needed someone who specializes in fibroids.”

Leading up to her surgery date, Ashley’s bleeding was so severe she needed a blood transfusion right before undergoing surgery. She spent two days in the hospital receiving blood and then went straight to the surgery center.

Dr. Danilyants removed four large fibroids as well as several small ones in a successful laparoscopic myomectomy. Ashley recovered quickly and, after waiting the requisite six months to start trying to get pregnant, she and her husband were ready to build their family.

“It was a phenomenal experience from the day I called up until the day of my procedure and going home,” Ashley said. “For once in a long time, I felt really good.”

Don’t give up on your chance to start a family. Find out if fertility-saving fibroid surgery is the right option for you.

A Mother’s Day to Remember

After surgery, she followed up with her gynecologist. He couldn’t believe his eyes.

He was amazed by how well Ashley had healed and how Dr. Danilyants was able to remove every fibroid.

This month, Ashley is enjoying her first Mother’s Day with a healthy 9-month-old baby boy she and her husband named Decree. And she wants women to know there are other treatment options out there for fibroids and other complex gynecological conditions.

“If you’re struggling with fibroids, you don’t have to suffer,” Ashley said. “Don’t give up. Don’t lose hope.”

PrevPreviousWomen’s Health – Think You Have Adenomyosis? This Might Help
NextRecovered from COVID-19: How Soon Can I See the Doctor for My GYN Condition?Next
Related Articles