On average, most adult skeletons are replaced with new bone every ten years. When you are young, your body makes new bone faster than it breaks down old bone. However, as you age, bone loss may occur more quickly than your body can produce new bone. This is known as primary osteoporosis and is commonly …

A new, comprehensive study by scientists at the Institute of Cancer Research in London followed 39,000 women on hormone therapy for 6 years showed that estrogen-only therapy showed no overall increase in breast cancer risk compared with women who had never used HRT. This type of therapy can be safely prescribed to women who no longer have a uterus. However, those using combined HRT, a combination of estrogen and progestogen, had a 2.7 times greater risk than non-users, significantly higher than previously reported. This is the type of hormone therapy that can be prescribed to women who have not had a hysterectomy. Estrogen-only therapy can negatively affect the uterus and requires progesterone to balance out the effects. Estrogen therapy alone can increase the risk of uterine cancer.

The implications for women who have GYN conditions that would benefit from a minimally invasive hysterectomy are now two-fold. In addition to treating a condition like fibroids, or adenomyosis, a hysterectomy opens a woman up to a safer form of HRT when she reaches menopause.

More Than 1.6 Million Women in the United States Need GYN Surgery Annually, But Few Know What’s At Stake. A recent national survey commissioned by The Center for Innovative GYN Care revealed that more than half of women in the U.S. are unclear about GYN conditions and surgical procedures. Read more in the press release.

Worried about menopause? Get the five fast facts about hormone replacement therapy, so you can be well prepared when speaking with your GYN specialist.

Getting or staying healthy is a challenge we all face as we age. Hormones play a leading role in how our bodies function, and can affect how healthy we feel. During National Women’s Health Week, we encourage all of our patients and their families to take a more active role in their health. 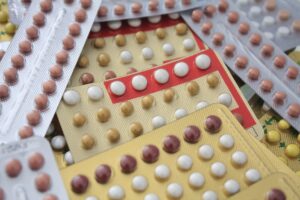 Every woman is different. Hormone replacement therapy for menopause symptoms should be tailored to each woman to account for her age, health, and whether or not her uterus is intact, or a partial or full hysterectomy has been performed. Estrogen-only HRT is safer than combination HRT, but should only be taken by women who have had a hysterectomy.