Why I Traveled to CIGC from the UK for GYN Surgery 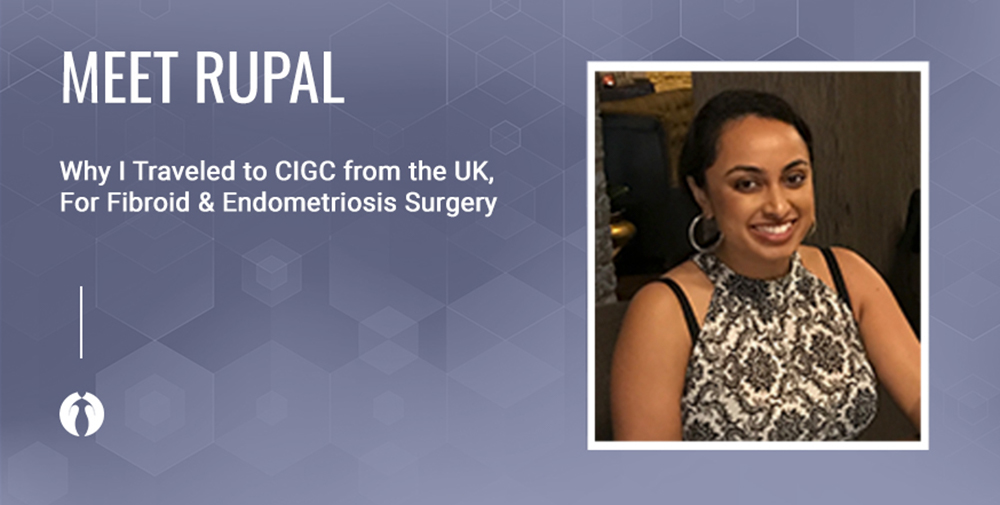 When Rupal approached her general physician in London after years of painful periods and heavy bleeding, the response was, “Oh, that’s normal. You just have to deal with it.” She was told to take painkillers and go home.

But Rupal knew something wasn’t right. She researched her symptoms and suspected the problem was either endometriosis or uterine fibroids. As a resident of the United Kingdom, Rupal needed to go through her general physician before seeing a specialist, but her doctor did not believe anything was wrong and was reluctant to escalate her concerns. After about eight years of pushing to finally be referred to a specialist, the diagnosis was confirmed. Rupal‘s scans showed a large fibroid and possible endometriosis.

Fibroids and endometriosis frequently occur at the same time, but both conditions are often missed during regular wellness exams. When a pelvic exam appears normal, many physicians may dismiss symptoms. But pelvic exams alone can’t always identify the presence of fibroids, and an ultrasound should be performed to rule them out.

Rupal had a laparoscopy to confirm her diagnosis of endometriosis, but her physician told her the fibroid was too large to remove laparoscopically and would require a separate open surgery. As the then only recommended option, the open surgery included a five-night hospital stay and six to eight weeks of recovery. Rupal was unconvinced.

Though she was told she was not a candidate for a laparoscopic myomectomy, Rupal researched every available option and went through the pros and cons of each surgical method. In an online search she found The Center for Innovative GYN Care (CIGC) in the United States and decided to reach out for a second opinion. As soon as the team at CIGC evaluated Rupal’s scans, they assured her she was a candidate for the Laparoscopically Assisted Abdominal Myomectomy (LAAM®) procedure. This minimally invasive, fertility-preserving surgery can remove both small and large fibroids with two small incisions, no hospital stay and a one– to two-week recovery.

Rupal decided the long trip from the United Kingdom to the United States was worth it to avoid open surgery and undergo a less invasive procedure. And Rupal’s decision was supported when, on day five after surgery, she felt well enough to go site-seeing in Washington D.C. She was easily able to manage her post-surgery pain with over-the-counter medication and she flew back to the UK a week after the procedure.

“Once I was home, I was walking and moving around,” Rupal said. “I didn’t feel like I just had to stay in bed and recover.”

Two years later, Rupal is feeling good. Recent scans show her fibroid has not grown back and she’s able to manage her endometriosis with birth control pills. She’s happy with her decision to travel to CIGC for treatment and encourages women in similar situations around the world to push for a diagnosis and be their own best advocate.

“Sometimes you really do need to push to get your diagnosis,” Rupal said. “Don’t take ‘it’s normal’ for an answer. It’s very common, but it’s not normal.”

Are you looking for a second opinion? Learn more about CIGC’s travel program and take control of your health.