The End of Essure: Closing a Chapter on a Threat to Women’s Health 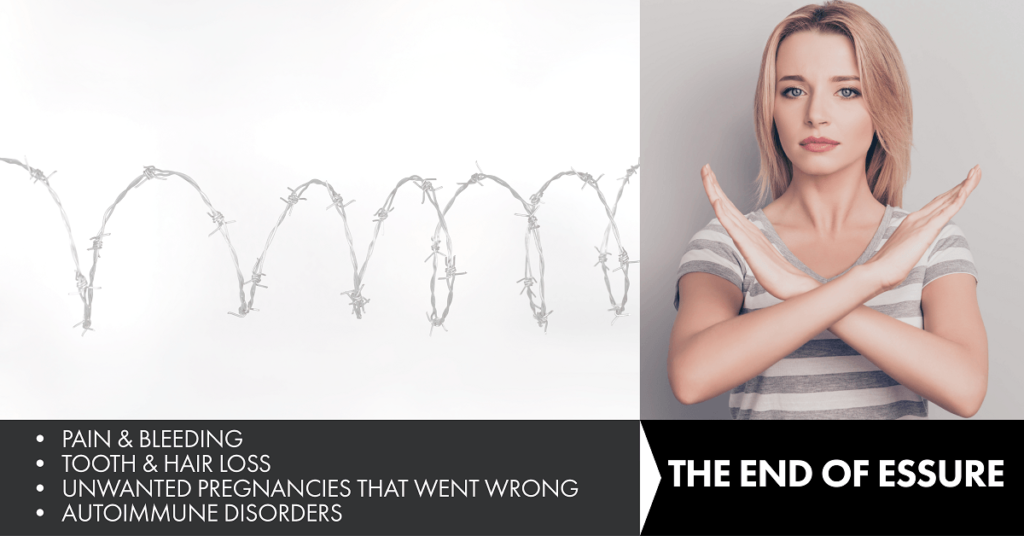 Permanent birth control device Essure will no longer be sold in the United States. After battling thousands of complaints and lawsuits due to the negative side-effects of Essure, manufacturer Bayer announced at the end of July that it would cease its distribution in the U.S., the final major market to close any and all use of the controversial coils. Previous markets including Canada, the United Kingdom, Finland and The Netherlands stopped allowing Essure to be used, and France and the Ukraine also had a moratorium in place for the device.

Essure Statement from Scott Gottlieb, Food and Drug Administration Commissioner: “Essure is estimated to have been used by more than 750,000 patients worldwide since it was first approved by global regulatory authorities. The device has been associated with serious risks including persistent pain, perforation of the uterus and fallopian tubes, and migration of the coils into the pelvis or abdomen.”

The suffering caused by the side-effects of Essure led many women to choose surgical removal of the device. In some cases, the coils could be viewed on imaging and surgeons felt they could be safely removed via tubal ligation. However, many of the women who complained of pain or bleeding also had coils that wandered beyond their initial placement. Some coils perforated the tubes or the uterus, and some were found in areas within the pelvic cavity. In many cases, hysterectomy was one of the safest ways to ensure the coils could be completely removed. For women who wished to file complaints against Bayer, it was recommended that the uterus and fallopian tubes be removed intact so that the pathology could be used in their claim.

Given the unpredictability of the coils, laparoscopic hysterectomy in the hands of a surgical specialist may be the necessary method of removal for women across the U.S. who continue to suffer from the side effects of the device. This minimally invasive approach can reduce the trauma from surgery, which can often exacerbate the pain women are already experiencing.

Per instruction by Bayer, the coils were inserted into a woman’s fallopian tubes through the vagina during a visit to a doctor’s office or Planned Parenthood facility. The coils are made of a nickel-titanium alloy, and the claim by the initial manufacturer Conceptus and subsequently Bayer, was that the scarring created by the insertion into the fallopian tubes would permanently block the fallopian tubes preventing sperm from reaching the ovaries. Medical professionals trained by the company in using the catheter to insert the coils were expected to be able to perform the procedure without any incisions. Until more and more women came forward with their stories, clinics like Planned Parenthood which are non-surgical facilities, often pushed Essure as a non-surgical option for women who wanted a permanent solution to birth control.

For Many Women, The Damage Is Done

The side effects that resulted from negative reactions to Essure ranged from gynecological to autoimmune with a range of symptoms that were in many cases confusing and life-altering. Allergic reactions to the nickel in the coils created systemic inflammation. In many cases, the reactions were so severe and seemingly unrelated that it took a long time to connect the dots. To this day, despite the vast number of devices that have been placed, it’s impossible to get an exact estimate of women who have had negative reactions, because they and their physicians may not associate existing symptoms to the device.

Read the full article here | The End of Essure: Closing a Chapter on a Threat to Women’s Health