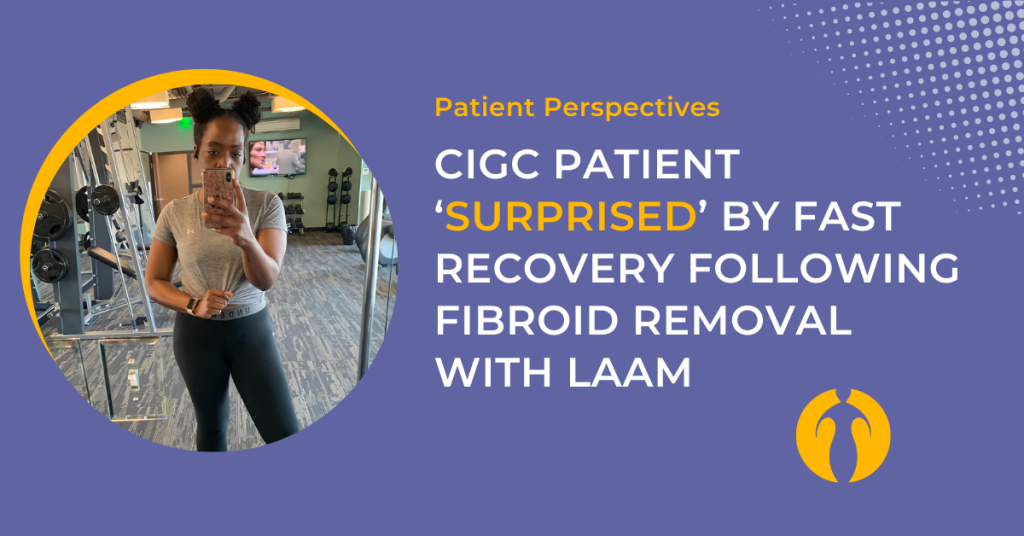 When Victoria came to The Center for Innovative Care® (CIGC) for her fibroid treatment, she was initially interested in the shorter recovery times that CIGC’s minimally invasive procedures offered. However, with a family history of fibroids and an aunt who passed away due to fibroid complications in the 1990s, Victoria was skeptical about CIGC’s Laparoscopially Assisted Abdominal Myomectomy® (LAAM) two-week recovery. Fortunately, after conducting her own research and speaking with CIGC’s co-founder, Paul J. MacKoul, MD, Victoria elected to have the fertility-sparing LAAM procedure to successfully remove her fibroids.

The first time Victoria was diagnosed with a fibroid was at her annual GYN appointment in 2018. At the time, she was living in Texas, and her doctor recommended that they keep a watch on it since it was fairly small.

In 2020, Victoria moved to the DC area and began to see a new gynecologist. She discovered that she had gone from one fibroid to seven in under two years, but since Victoria wasn’t trying to have children, her doctor again recommended simply keeping a watch on them.

When Victoria returned to her doctor in May 2021, the possibility of having children entered the conversation. She decided that preserving her fertility was important to her, and she wanted to explore her treatment options. Based on where her fibroids were located, Victoria’s OBGYN referred her to CIGC so she could have a shorter recovery time.

Before Victoria made an appointment, she looked into CIGC to determine what type of patients and conditions the practice typically sees. While researching, she came across the Laparoscopically Assisted Abdominal Myomectomy (LAAM®) procedure.

“I knew this must be the procedure my doctor was talking about, and it seemed very hopeful,” Victoria said, remembering the event.

LAAM is a minimally invasive surgical technique that was developed by CIGC specialists in 2005 to remove uterine fibroids of almost any size. When compared to robotic and open surgeries, LAAM offers a much faster recovery, less pain, and fewer complications.

Although Victoria had her doubts about how the recovery time could drop from eight weeks to two weeks, she was eager to find out. As a result, she made an appointment with Dr. MacKoul at CIGC.

Remembering her first appointment at CIGC with Dr. MacKoul, Victoria recounts how informative the conversation was. He began the appointment by performing an ultrasound to get an understanding of how many fibroids were present, at which point they found out that there were at least ten. From there, Dr. MacKoul talked to Victoria about her various treatment options. Since Victoria wishes to have children, he recommended the LAAM procedure.

“He said a myomectomy could actually decrease my fertility rate,” Victoria explained. “That’s why he suggested LAAM, based on my age, the location of the fibroids, and, of course, recovery also plays a big part.”

After her appointment, she said, “Dr. MacKoul made me very comfortable and confident that I was definitely in good hands.”

The Day of Victoria’s LAAM Procedure

Victoria had surgeries before, so she anticipated the long wait times typically associated with hospitals. On the day of her LAAM at the ambulatory surgery center (ASC), she prepared herself with the mindset that the procedure would take a considerable amount of time. Instead, she was called from the waiting room to pre-op within ten minutes of finishing her paperwork, and already, she was surprised that the process was taking faster than she anticipated.

Victoria appreciated how all the providers involved in the surgery spoke with her beforehand. Speaking face-to-face with those participating in her procedure significantly calmed her down before her surgery, especially since her family could not be with her in the ASC due to COVID safety precautions.

After waking up from her procedure, Victoria could walk out of the ASC and back to her car. Although she experienced some discomfort the first night, she woke up the morning after her surgery and drove back home. Victoria said, “It was actually a very smooth process.”

Each day after her procedure, the pain subsided a little more, and she was able to move more. Within two weeks after her surgery, Victoria was back in the gym, walking on the treadmill.

About three weeks after her procedure, Victoria met with Dr. MacKoul for her follow-up appointment. At her follow-up, she discovered that Dr. MacKoul removed 15 fibroids and some endometriosis as well, which she wasn’t even aware she had. Fortunately, as Victoria explained, “The healing process was very seamless.” She liked the fact that she could shower the next day, and she didn’t have to make any significant lifestyle changes during her recovery.

“I was surprised how quickly the recovery was,” Victoria conveyed. “You hear it, but when you go through it, it was definitely surprising in a good way.”

Living with fibroids can significantly affect your fertility and reproductive health. If you or a loved one is suffering from fibroids, contact CIGC. We are leading the way in advanced surgical techniques to remove fibroids while helping patients preserve their fertility. Schedule a consultation with one of our specialists today to learn more.

PrevPreviousWhen Is It Time to Consider a Hysterectomy?
Next7 Questions to Ask Your Provider Before GYN SurgeryNext
Related Articles

GYN Surgery at ASCs Have More Patient Benefits Than at Hospitals