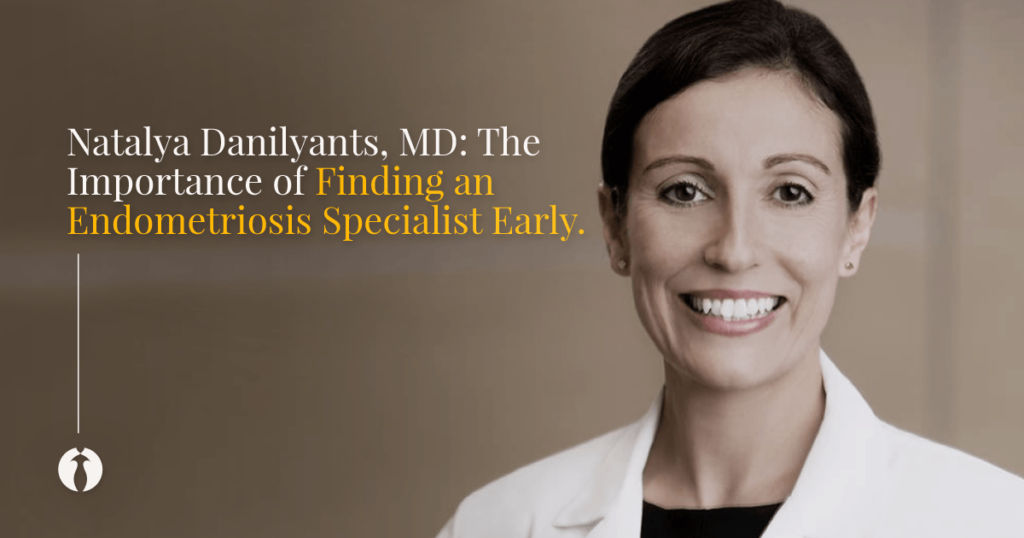 Natalya Danilyants, MD sat down with Samantha Schwientek at the CBC in Nova Scotia for her series on the effect of endometriosis pain on women’s lives and the lack of specialist care for treatment. Shelby Steylen underwent a hysterectomy at 25. After years of struggling with menstrual pain beginning at age 12, and hitting a wall with medical professionals, she finally got answers. Endometriosis had fused her uterus to her bowel. Dr. Danilyants explained the importance of finding an endometriosis specialist who can perform a laparoscopic endometriosis excision procedure. Hysterectomy is not a cure for endometriosis, and if treated incorrectly, endometriosis can actually get worse.

from the CBC article:

“A few weeks before her wedding, Shelby Steylen and her fiancé sat down to discuss their future.

Both wanted a family. But that decision was ultimately decided by Steylen’s health.

Less than a year after they were married, Steylen decided to undergo a hysterectomy at the age of 25 to relieve the debilitating pain associated with endometriosis.

“It wasn’t an easy decision but my endometriosis went untreated for so long that the damage that was done [meant] the regular surgeries weren’t really doing anything anymore,” Steylen recently told CBC Radio’s Information Morning Nova Scotia.

In Steylen’s case, the tissue from her uterus had become attached to her bowel — a difficult complication.

Dr. Natalya Danilyants, co-founder of the Center for Innovative GYN Care in Maryland, said Stage 4 endometriosis — the most severe and complicated form — makes it almost impossible to remove all the tissue. If the tissue isn’t entirely removed, the endometriosis can return with a vengeance. In these situations, Danilyants said she would opt for a full hysterectomy because the tissue often binds itself to nearby organs.

Full hysterectomies can resolve the pain associated with endometriosis. But whether it’s a partial excision or some kind of hysterectomy, the results depend upon the doctor’s ability to remove all of the tissue.

Steylen’s hysterectomy involved the removal of her uterus and one ovary, and it left her unable to become pregnant. The other ovary was left untouched to prevent her from going into early menopause.

Danilyants said leaving one ovary behind can stimulate endometriosis because it thrives on estrogen, which is produced by ovaries.

“I probably would have taken out both ovaries because by leaving that ovary her risk of recurrence is very high.”

However, she says that a hysterectomy is usually a last resort to try to resolve endometriosis, and pain relief isn’t a guarantee unless all of the affected tissue is removed.

Now a year out from her surgery, Steylen said the initial improvement she got from having her uterus removed has dissipated and she’s back to the same level of pain she had before the surgery.

It began at age 12. Steylen had painful periods that caused her to miss several days of school each month.

Doctors recommended naproxen to deal with the pain. She said she believes the doctors thought she was being “dramatic” about the level of pain she experienced.

It wasn’t until she was 20 and looking for a job that Steylen decided to push for answers.

“How could I apply for jobs when I was missing [two or three days] a month?”

She received a referral to a gynecologist and had laparoscopic surgery immediately. She said that was when she realized the severity of her condition.

“Endometriosis is a bad weed [growing] in your body,” she said.

Over the next few years she struggled with pain management, at some points making weekly visits to the emergency room. Those visits had complications of their own.

“A lot of times going to the hospital, doctors think you’re drug-seeking.”

Finally at 25, Steylen had the hysterectomy knowing three things could happen: it could help the pain, things would stay pretty much the same or the pain could worsen.

They took the risk and Steylen had the surgery, but ultimately she’s back to where she was a year ago.

The severe pain leaves her breathless and unable to speak. She works one day a week as an office manager but said she can’t do much driving because of how her pain medication affects her.

At a doctor’s appointment when she was 24, Steylen said she was told to have a child before getting the hysterectomy. “But I kind of left that appointment so confused because … there’s no way I could get pregnant and take care of a child.”

In addition to pain management problems with her endometriosis, Steylen also suffers from fibromyalgia. She makes weekly visits to a pain clinic in North Sydney to get lidocaine infusions.

Now she has advice for other women who may be struggling with endometriosis.

“I feel silly for not fighting more,” she said, adding that it can be hard to be confident enough to disagree with your doctor.

Speak up about pain

If she could do it over again, Steylen said she’d sit down with her parents and ask for their help in getting access to the proper health care.

“If your period is affecting you that much, it isn’t normal. You need to sit down, write down your symptoms and tell your doctor.”

She stresses discussing the severity of the symptoms and not being afraid to seek help on a sensitive issue.

“I wasn’t sent to a [gynecologist] until age 20. Ask to see one,” Steylen said. “With this disease you have to be on top of it.”

No specialists in Nova Scotia

For now, Steylen is looking to get a referral to a specialist. There aren’t any in Nova Scotia so she’ll have to travel to see one outside of the province.

Steylen said she thinks the lack of specialists in the area has contributed to her struggles with endometriosis.

The provincial Health Department told CBC the management of endometriosis is within the scope of gynecologists, but Danilyants said that’s not usually the case. She said ob-gyns often prefer to deal with endometriosis by treating it with hormonal contraceptives. Many doctors’ only surgical training happens during their residency so the longer they’ve been practising, the less comfortable they are operating.

“Because of their surgical inexperience, sometimes [gynecologists] don’t want to do surgery because they’re afraid they’re not going to be able to remove it all,” said Danilyants.

PrevPreviousWTOP | When To Seek a GYN Specialist: Fibroids, Endometriosis, And Pelvic Pain
NextSurgical Fibroid Removal Options: How To Choose Between A Hysterectomy And A MyomectomyNext
Related Articles