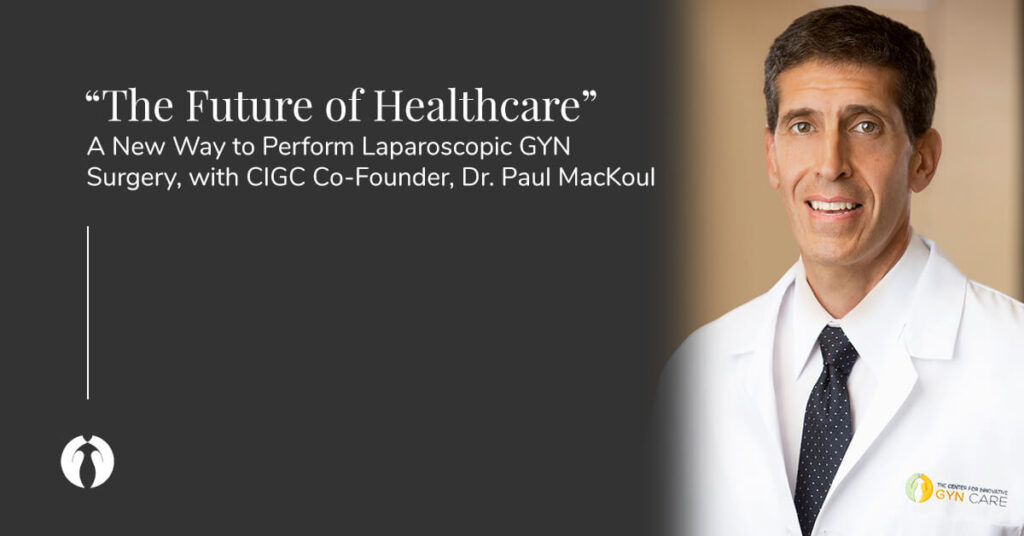 “It was clear that a change was necessary in the way patients underwent GYN surgery, and that change would require new techniques and procedures to allow for better outcomes, lower complications, and decreased cost.” -Dr. Paul MacKoul

In a recent interview with Thrive Global and Authority Magazine writer Christine D. Warner, Dr. Paul MacKoul explores the circumstances surrounding the lack of expertise when it comes to minimally invasive GYN surgery, which in many cases leads to sub-par outcomes for women being treated for complex GYN conditions: the proliferation of robotics and their acceptance as the standard of laparoscopic GYN care, the bond of trust between a patient and their OBGYN, and the fact that most OBGYNs have not received the advanced surgical training necessary to treat GYN conditions.

But women do have hope. Backed by published peer-reviewed research, the minimally invasive techniques developed by Paul MacKoul MD and Natalya Danilyants MD, co-founders at The Center for Innovative GYN Care® (CIGC®), render superior outcomes with faster recovery time and less pain – all in an outpatient setting, which means lower costs for patients as well.

Learn more about what inspired Dr. Paul MacKoul to specialize in laparoscopic GYN surgery and his “big idea that might change the world.”

Can you tell us about your “Big Idea That Might Change The World”?

It was clear that a change was necessary in the way patients underwent GYN surgery, and that change would require new techniques and procedures to allow for better outcomes, lower complications, and decreased cost. Laparoscopy, or minimally invasive GYN surgery, was the future, but there were definite problems with the way laparoscopy was being performed by the OBGYN. There appeared to be very few advances in the way the surgery was performed. In other words, the techniques and procedures were not changing as they were in other surgical specialties. There was a lack of “innovation” and application of any new techniques and procedures, but more an adoption of expensive “tools” to get the surgery done. The tools being used, such as robotics, would never allow for better surgical techniques, but would allow possibly more surgery to be performed at the expense of possibly higher complications and cost.

As an answer to this problem, I developed new approaches to minimally invasive GYN surgery by applying both known techniques performed in open surgery with new applications in laparoscopy to allow for a better way to perform hysterectomy, myomectomy, and other procedures to optimize outcomes for patients. These procedures had to be safe with much smaller incisions, with a procedural time that was much faster than the OBGYN approach, and resulted in better recovery times and lower cost. The procedures developed included DualPortGYN Hysterectomy and LAAM — Laparoscopic Assisted Abdominal Myomectomy.

It was necessary to publish the data, and prove that DualPortGYN Hysterectomy and LAAM approaches were superior to the standard and robotic procedures being performed for hysterectomy and myomectomy. A retrospective comparison trial of hospital based DualPortGYN Hysterectomy to robotic, open, and laparoscopic procedures in 3000 patients — the largest comparison study of its kind — revealed lower complications, smaller incisions, a faster recovery time, a cost savings of up to $5000 for this procedure. The same comparison for hospital based LAAM procedures revealed similar outcomes as compared to robotic, laparoscopic, and open procedures with a cost savings of up to $4000. This alone is a significant savings in the hospital setting, considering the number of hysterectomy and myomectomy procedures performed nationally in the U.S. The cost savings is in the hundreds of millions of dollars nationally. The same procedures were then performed in the Ambulatory Surgery Center (ASC) setting, and the data published. Comparison of DualPortGYN Hysterectomy and LAAM, ASC to hospital, showed no difference in surgical outcomes or in the profiles of patients performed at either site. This now proved that the same patients who had these procedures in the hospital can be done in the ASC, with the same clinical outcomes but with further cost savings.

To summarize, new techniques and procedures, or new procedural technology developed by CIGC proves that there is a better way to perform GYN surgery from both the clinical standpoint, as well as financial. DualPortGYN hysterectomy and LAAM procedures are safer, faster, and cheaper to perform in the outpatient ASC setting, and have higher patient satisfaction rates than any other type of hysterectomy or myomectomy nationally or internationally.