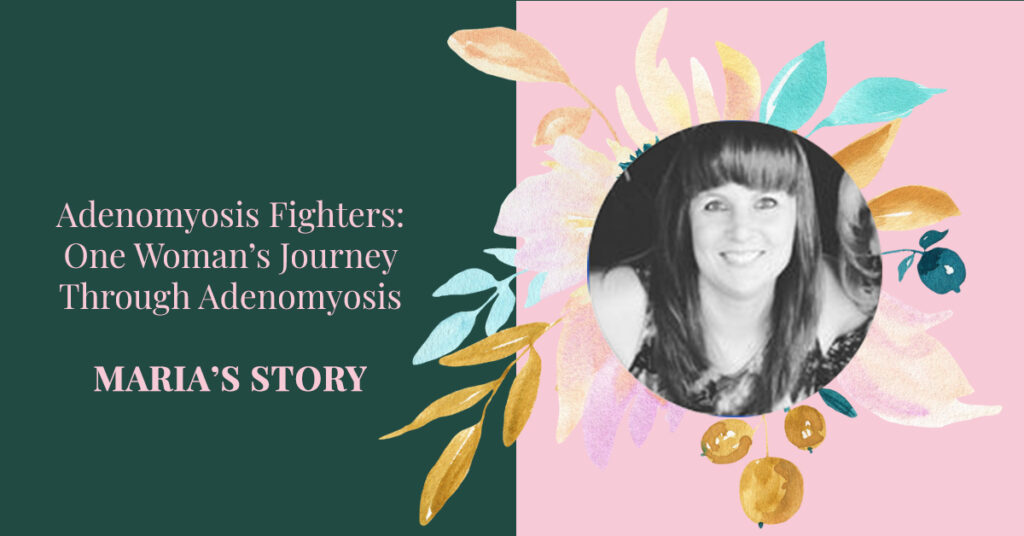 Maria Yeager started the online support group Adenomyosis Fighters after struggling with severe symptoms from adenomyosis for 17 years. After countless doctor appointments, dismissed symptoms and debilitating pain, she knew she didn’t want any other women to go through the same difficult journey without support.

CIGC is proud to partner with Yeager and Adenomyosis Fighters to help bring awareness to adenomyosis, a GYN condition that occurs when uterine tissue begins to grow into the wall of the uterus. This usually results in an enlarged uterus, heavy bleeding and severe pain. Adenomyosis is a little-known condition, but it’s estimated that 20-65% of women may have it¹. Because it can be difficult to diagnose, women like Yeager often go years without knowing the cause of their symptoms.

When she was 24, Yeager had her first “attack.” Waves of pelvic pain radiating across her lower abdomen and back woke her up in the middle of the night. She was sweating and so lightheaded she was seeing stars. She called her mom, who came over immediately and drove her to the emergency room. The emergency room doctors sent her home with a diagnosis of food poisoning.

A year later, she had another attack. She noticed some similarities. Both attacks had occurred during her period and had identical symptoms. The pain would typically last at least three hours and end with a bout of diarrhea before letting up. At this point, she knew it must be GYN-related.

She made an appointment with her general practitioner, who diagnosed her with irritable bowel syndrome (IBS) — a condition often diagnosed in place of adenomyosis — and told her to drink more water and eat more fiber. But diet changes didn’t help. Just a few years later, the attacks had become more frequent to the point that they were happening on a monthly basis.

Yeager was in and out of doctors’ offices trying to figure out what was going on. One gynecologist only prescribed Motrin. One doctor suggested her pain was in her head, caused by a panic attack. Another suggested a colonoscopy, which came back normal. She went on and off all kinds of medications that gave her no relief. One physician finally performed a laparoscopy, finding and removing endometriosis on her right ovary. But two months later, she was once again in severe pain.

“I was ready to pull my hair out,” Yeager said. “I was miserable.”

Despite her monthly pain attacks, Yeager and her husband were trying to conceive a baby. After trying for a year with no success, Yeager’s doctor prescribed Clomid, a fertility drug. The drug’s side effects only worsened her already severe symptoms each month. She had hot flashes, night sweats and felt nauseated most of the time. Throughout all of this, she was never able to confirm a pregnancy. She went back on birth control to try to get a handle on her symptoms.

Get the adenomyosis care you deserve. Talk to a patient advocate about your treatment options today.

In the early 2000s, Yeager’s gynecologist felt a possible fibroid during a routine exam but didn’t suggest removing it. A few years later, an ultrasound showed a polyp, which was removed during a hysteroscopy. Her doctor was convinced the polyp was solely responsible for Yeager’s attacks, but her pain continued. At this point, she was passing blood clots as big as the palm of her hand and her pain was near constant. After a move to Texas, she found a new gynecologist and begged for some kind of resolution.

Pathology after the procedure confirmed a diagnosis of adenomyosis, a condition Yeager had never heard of until that moment.

You deserve a pain-free life. Put yourself on your priority list and talk to a patient advocate today.

Adenomyosis Fighters: Learn to Be Your Own Health Care Advocate

Since her hysterectomy in 2006, Yeager hasn’t experienced any pain at all. She’s now well-informed about the signs and symptoms of adenomyosis and she’s determined to help other women like her avoid the pain and frustration she experienced for almost two decades.

“I remember the depression and mental toll,” Yeager said. “A lot of people talk about the physical symptoms, but it also takes a mental and emotional toll on women.”

She started Adenomyosis Fighters in 2017 to give other women the support she didn’t have. Since its beginning, the group has grown to over 11,000 members worldwide and taken on a life of its own.

“My main concern is not only to get the truth out about the severity of adenomyosis, but I wanted women to have a place they could go to vent,” Yeager said. “The only rule is to be respectful of other women. They have the freedom to say what they want to say.”

She’s written books about the condition and, using her science background, continues to study existing research on the condition to try to find its cause.

“My long-term goal — maybe by the time I’m 80 years old! — I’ll come up with something that will possibly indicate the cause of adenomyosis,” Yeager said. “My ultimate goal is to figure out what causes this the happen.”

Making more people aware of adenomyosis makes it more likely they will be able to recognize the condition’s symptoms and push to get a diagnosis. Support groups like Adenomyosis Fighters can help you learn to advocate for yourself and seek out the health care you deserve.